It’s been nearly a decade since Siegfried and Roy last dazzled Vegas with their popular illusion act that featured a variety of exotic animals, most famously white tigers. The German-American duo’s highly regarded performance at The Mirage Hotel and Casino was the highest-visited show in Vegas, until October 2003, when the magicians’ stage careers came to an end after Roy Horn was bitten on the neck by one of the show’s tigers.

Since the accident, Horn has made a miraculous recovery and does not blame the seven-year-old tiger, named Montecore, for his injuries. Roy claims that Montecore was attempting to pull him off stage to safety due to an audience related commotion and accidentally punctured his neck. 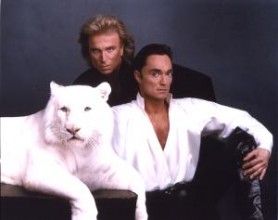 Though the famed magicians have left the stage and big gigs behind, they have admirably continued their efforts to support their beloved wild animals. The Siegfried & Roy’s Secret Garden & Dolphin Habitat is an animal sanctuary and research facility located in The Mirage. The sanctuary is home to nearly 40 striped white tigers and a number of leopards, lions, and panthers, as well as a 2.5-million-gallon aquatic habitat for dolphins.

Despite a number of critics have expressed their disagreement with the dedicated duo’s decision to keep their animals on display in Las Vegas, the sanctuary has been well received and offers a number of tours, birthday parties, and educational classes, all providing an emphasis on wildlife preservation and animal safety.

Thanks to their current ventures and commitment to conservation, Siegfried and Roy continue to display the allure and majestic nature of wild animals. Except this time around, no magic is required.