We gratefully support our soldiers as they selflessly defend the rights and freedoms of every citizen in our country. However, for many of these warriors, the fight doesn’t end when they return home.

Every 65 minutes a veteran commits suicide; most of them suffering from PTSD (Post Traumatic Stress Disorder).  According to the Department of Veterans Affairs, 184 new cases are diagnosed daily. The K9s For Warriors Program/Rescue rescues dogs prior to being euthanized and trains them to be service dogs for veterans with PTSD and Traumatic Brain Injury. The program is 100% proven, transparent and successful!  94% of every dollar donated to K9s For Warriors goes directly to the Veteran & service dogs.  Only 6% is used for fundraising and overhead. Shari Duval, the founder and Executive Director doesn’t receive a salary.

Animals, especially canines have an uncanny ability to sense when a person is worn down, depressed and has a sad case of the blues. These same dogs are like furry angels that help heal our veterans mentally, physically and spiritually. This is an alarming statistic, but studies prove dogs are very therapeutic in the treatment of PTSD and other military-related stresses.

K9′s For Warriors was founded by Shari Duval (wife of PGA TOUR player Bobby Duval).  Duval commented, “The warriors arrive here broken on two legs and leave here recovered on six.  They are able to go and do things that weren’t possible before they received their service dog.” She added, “These dogs provide more medical improvement for the warriors than all the drugs they have been placed on.”

K9′s For Warrior has a worthy goal of building a “dream facility.” This site will rescue 200-250 shelter dogs every year, matching them up with war veterans. This worthy endeavor will take a lot of funding – upwards of $2 million.  Duval states, “It costs approximately $10,000 to graduate one warrior/canine team from the time the dog is accepted into training (including costs), housing, feeding and training the warriors and their canines for the three weeks they live and train together at our facility.

You can also help this worthy cause by supporting the BARK BUSINESS BENEFIT TOUR , starting your own fundraiser, donating your time or resources. This noteworthy tour will help raise awareness and funds for K9′s For Warriors!  Wendy Diamond was inspired to create this initiative after Craig Newmark, Founder of Craigslist, informed her earlier this year that Every 65 minutes a veteran commits suicide; most of them suffering from PTSD (Post Traumatic Stress Disorder).  Wendy Diamond dedicated her new hilarious business book How To Train Your Boss To Roll Over to the Veterans and her tour to support K9s For Warriors. Wendy and Animal Fair  committed to raise $150,000  for 15 dogs to be rescued from shelters and trained as service dogs for 15 Veterans with PTSD!  Our bark business benefit tour will honor our wounded veterans and rally to raise awareness and donations for our American heroes that have sacrificed selflessly for our country.

Thanks to our generous sponsors, the tour will 100% benefit K9s For Warriors. Ellen DeGeneres’ pet food company, Halo, Purely for Pets knows that natural nutrition is imperative for service dogs (and all dogs) because it ensures a long, happy life with their parents, and are on board with supporting the K9s For Warriors Bark Breakfast Benefit Tour! American Express Open has partnered with us to empower and support Veteran small business owners. The Loews  and Omni  pet-friendly hotels are graciously providing the space for the Bark Business Breakfast, so we can gather, raise money, and get the bark out about K9s For Warriors

Please join us on tour:

If you don’t live in any of the cities below you can still contribute to one of our fundraisers!

You can support from anywhere  – K9’s For Warriors isn’t funded by government agencies and operates purely on donations. 94 cents of every dollar goes directly to the Veterans and dogs – 6% to overhead.  This charity is 100% transparent and successful! Please consider donating to this inspirational tour – even if you cannot attend the event. Donations can be made in any amount – as little as $10, $50, $200, $1000 or you can become an honorary chair for $10,000. Start your own fundraising team today!

We need all the help we can get! If you would like to volunteer, donate resources or time – anything please email yappy@animalfair.com and in the subject line include your city to Volunteer! The more awareness we bring to the alarming statistic that every 65 minutes a Veteran commits suicide (Department of Veterans Affairs), the more lives we can save!  Our Veterans have fought selflessly for us – It’s our turn to fight for them! 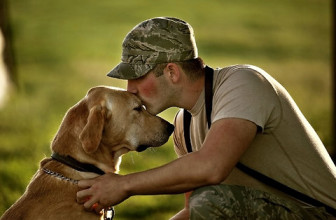 Animal Fair is donating our time, contacts and resources to support our Veterans.