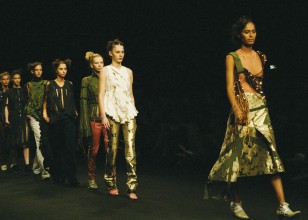 It began as a creative thought. Bring London fashions to animal lovers. I was asked over and over again, “Why? What is the tie-in?” Photographing fashion for an animal magazine?

My answer (to me) made simple indisputable sense. Animals are the matchmakers of the new millennium. Look good to meet good-looking.  In the face of my argument, designers delightedly shared the fact that their muses are, more often than not, four legged and life long best friends.

So here I was at fashion week, the clothing industry’s bi-annual event of beauties, at Sloane Square.  Judging from this season’s collection of spiders in webs, owls, sheep and organic earth tones, the event inspires socially and environmentally responsible designers influenced by their pets and wildlife. I mingled with the designers and got their stories.

Caroline and Anita are design partners at Fred Bare, known for their earthy hats with a lived in feeling. Fred Bare’s business card features Murphy, Anita’s ten year old lurcher, tearing racing, as lurchers do, with a Fred Bare hat in his mouth. An image driven by personal experience?  Well, it made sense as Murphy will often grab and run, with Anita in pursuit.

Canadian designer Neal Gershinson brought home Billy to his wife four years ago. Life has been a doggie bag of joy since. They launched their bag company under his name, honoring a new breed every year as their design graphic. This year it is a beagle. Before, it was a bulldog, a Scottie and others, all wearing hats. Billy, a four year old Charles Spaniel, inspired one of their most popular dog walking bags.

Only Hearts sells “inner outerwear for the romantic and sexy souled woman” and is a family business begun 25 years ago on NYC’s Upper West Side. Only Hearts began when founder Helena was three months pregnant and borrowed $5000 to open her NY boutique. Today Helena, her husband Stuart and daughter Kaya, travel from NY to London twice a year, to present their femme fatal line of  form fitting intimates to buyers. Only Hearts boutiques are located in Los Angeles, Miami and Italy. The season’s signature creamy boustierre is decorated in floral, applique and layered cut outs and has kittenish play appeal. Helena says she is inspired by nature’s earth tones and draws upon her companionship with her black labs, Beauty and Diva, and cat, Lolita, while designing. She admits that separating from her pets when she travels is hard, and harder even this year, with the untimely passing of 18 year old Beauty. Celebrity clients include Jennifer Aniston, Courtney Cox Arquette, Halle Berry, Kate Capshaw, Madonna, Alyssa Milano, Britney Spears, Christy Turlington, Charlize Theron, Sean Penn, Ben Stiller, Jim Carey, Robert Deniro and Woody Allen.

Jennifer Scott is made up of two Canadian designers, Jennifer Kakow and Scott Richler.  The two joined forces in an adventuresome line of belts and bags to ‘walk on by’ in. Scott, grandson of Canadian author, Mordechai Richler, assures his nine year old brown spotted Dalmatian, Clyde, is well taken care of when Scott travels to London. Clyde stays with Scott’s mum. Admittedly a ‘little too crazy’ and a handful in the design area, very active Clyde is less of a muse to Scott, than amusing. Says Scott, Clyde is the best investment he ever made.

Kate and Helen met at a disco. By evening’s end, the two women were combining their  design talents as they found they had a lot in common.They both love wild life. Kate grew up on a farm, where she had many pets including  two donkeys, Jenny and Tommy and a rabbit, Thumper.  Helen loves to draw wildlife.  Kate prints Helen’s Max Escher inspired repeats of owls, foxes and other wildlife on by-product leather.  Sheridan.minns@btinternet.com

While Philip Treacy runs the business, Mr. Pig his Jack Russell owns it, or so he thinks. Mr.Pig’s beginning in life was less than notable. Runt of a litter, he was brought along with his bigger and prettier sister who was being given to Philip as a gift. One look beyond her to the fat, pink tiny pup was love at first bite for Philip. And their affair has continued on for eight years. No longer pink and fat, the name stuck to the dog, as famous for his custom designed lead and leash part of the fashion  line, as he is infamous. Noisy Mr. Pig runs a tight ship, refusing to let people he doesn’t like in the offices, indiscriminately biting queens and paupers alike.

No, these are the other Jacksons. The twins. Joey is the business manager. A slip of a thing in a booth crowded with adventure, Joey talks about Truffle, no ‘s’, the bearded ‘just your dog’ collie, the twins grew up with. The dog lead and collars The Jacksons make are outstanding. They should be. They are beaded by Kenyan Masai. The twins decided rather than donating money to the tribe to build a school and church, they would teach them to bead, using Masai beadwork fixed onto by-product-leather in the UK. ‘Masai are reliable’ said Joey.