Forty minutes outside of Sydney, in Dural, New South Wales there is a farm nestled among the rolling hills of the awesome Australian outback.  It is home to Simeon Stud, an Arabian horse farm, owned by Peter and Ruth Simon and Marion Richmond. Established in 1956 with a mare from the government stud in Sydney and 28 acres of land, it now extends across 44 acres of luscious pasture. Simeon Stud maintains three stallions, all of which are of  Egyptian descent, from Germany and the United States.

The Arab is a ‘hot-blood’, a term used for horses of Eastern origin.  While the roots of this awe-inspiring horse are obscure, it has lines that extend as far back as Ancient Egypt.  Egyptian hieroglyphics provide a fascinating window to the profound respect bestowed upon these animals by ancient civilizations.  The present day Bedouins, however, are today most closely associated with the Arabian breed, a breed strong enough to withstand the belligerent conditions of the deserts of the Middle East.

A distinct breed due to centuries of selective breeding, Arabs are among the oldest and purest breeds of horses and are recognized for their intelligence, versatility, gentleness and tractability.  Arriving in Australia in the late 18th century, the Arabian horse was for many years used to improve the local stock.  They were employed as herding animals, rounding up cattle with the aboriginal ranchers on outback properties before the days of motorbikes and helicopters.  The Australian government, as did many governments in other countries, had depots or ‘studs’ where Arabian stallions were available at a reasonable breeding fee for grade horses.

Simeon Stud’s main purpose is to supply breeding stock to improve current programs and to provide high caliber pedigrees to those individuals interested in establishing reputable stud farms.  Simeon Stud houses upwards of 50 horses during the foaling season (August through February) and foals approximately twelve mares per year. The majority of the foals are sold as weanlings (4 months of age), while some remain on the farm and are sold as yearlings or two-year-olds.  An internationally recognized program, Simeon Stud has sold horses to New Zealand, the United States, England (specifically, Charlie Watts, the drummer of the Rolling Stones), Sheiks and Princesses from the Middle East, and royalty from Malaysia.

Testament to the program’s success is Simeon Shai, a champion colt bred at Simeon Stud.  He triumphed as the 1991 United States and Canadian National Champion Stallion who was also Supreme Champion at Scottsdale Show, the largest Arabian Show in the world.  Shai also achieved Champion Stallion at the International Show in Paris at the Salon du Choral.

The market for straight Egyptian Arabians coming from Simeon Stud range from fifteen thousand to one million dollars.  “Like good paintings or jewelry,” says owner Marion Richmond, “the best only appreciates with value.”

Born in Australia, Marion describes herself as “born loving horses.”  Though she has not been able to ride for some years due to a back injury, she remembers riding frequently with her children.  “I used to ride 5 or 6 hours a day in the Australian bush with one child in the front of the saddle and the other behind, probably dangerous,” she says.  “In those days we were not as safety conscious.”

Marion’s love of animals also extends to dogs.  She lives on Sydney harbor with her red Doberman dogs – and for a time she even trained obedience dogs.  “I like everything well behaved – dogs, horses, children and even adults!” she claims.

But horses are her first love.  “The greatest pleasure for me,” she says, “comes from being at the birth of our beautiful foals, watching them grow and playing in the pasture. And I have a great deal of pleasure when my clients’ horses win in the show ring.” 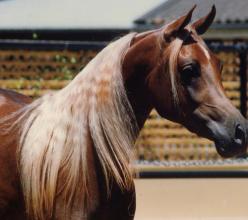