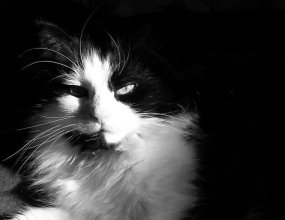 Remember that mutt named Millie who “dictated” Barbara Bush’s memoirs? Yeah, you know that prissy Springer Spaniel (fine, so she’s got lineage) who wouldn’t know decent four-legged dish if it smacked her in the Oval Office? What a joke! Doesn’t any true purveyor know you have to get a feline to do the catty job correctly? (Remind me sometime to tell you just who the President was walking besides that stupid pooch – you’ll be reminded of the current chief, I assure.)

That’s why my master (a term I use simply to humor the poor human), Ted Casablanca, asked me to do the job for him. He wanted me to set the litter record straight for those of you who read it instead of go in it. There are some bloody shenanigans goin’ on in Tinseltown, and I gotta get this stuff off my nipples or I’m gonna claw the next jerk who gives me a piece of processed turkey.

Fresh is best. Not that T.C. remembers that gourmet truism often enough. Why does he think I always head straight for those ten pillows he just finished fluffing, precisely, on that bed he seems to think is his? Ha! If the grub was better (and home-cooked) around this Hollywood Hills joint, maybe I wouldn’t pounce on everything he spends too much time arranging in the first place.

Oh, I saif I had some gossip, didn’t I? I suppose I should get to it, but, after all, I’m a creature who likes to rip flies apart as slowly as possible so don’t expect expediency from, sweetheart.

ISN’T that word obnoxious? T.C. uses it ALL the time, and it just makes me want to throw up even more hairballs than I already do. By the way, the look on his face when I do that on his canary-yellow damask Empire chair is MUCH better than when I pulverize his just-pressed bedding. And, of course, taking a whizz on his Ralph Lauren duvet is the ultimate, but I’m really getting off course here, so let’s get to the dirt already.

My sister, Cleopatra Celine, is Elizabeth Taylor’s godcat. I really shouldn’t get into that side of the family’s business, but, I’ve been sleeping with a professional for a while now, so I’ve learned a few things, like the unfortunate adage that no being or nothing is sacred. Besides, Cleo is my ADOPTED sis – she’s a stuck-up Somali Abyssinian, unlike moi, who entered this world in a dumpster.

So, Cleo is telling me on one of those many occasions when she hisses to me (never in front of T.C., mind you) that something hilarious – and quite dangerous – went down at Liz’s house. Not long ago, the Oscar-winning Dame ordered, via Fed Ex, one of the more recent additions to her sizeable Abby brood, most of whom are related to Cleo (a fact my insufferable ses never stops reminding me of).

Like I could give a dog’s rump, but here’s what happened: Liz was warned that the newborn kitty was too young to be shipped, but that pampered woman is used to getting her way, so sure enough the terrified thing was mailed in a box pronto. And what did it do, instantly, when released from the container?

The kitten promptly ATTACKED La Liz. The baby beast buried its teeth into the legend’s hand (which was slightly age-spotted, I must add, keeping with master’s attention to tacky detail). And guess what Taylor – who really is a trooper from all the meowing I hear around here – decided to name the ingrate?

Fang. Dontcha love it? Come to think of it, I’ve always wanted to be called Ferocious instead of Butch, but T.C.’s got this thing for rough trade, so this is the stupid moniker I end up with. Uh-oh. Here he comes. He just read what I said about his bedroom habits (like he, of all people, should complain), so perhaps I had better claw off. Speaking of which, I suspect my mine are about to get clipped. He’s SO sensitive – doesn’t he know I was kidding? He really can be a turd sometimes.