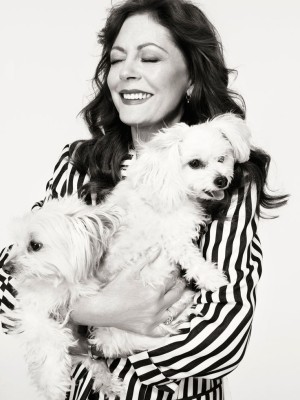 Although Oscar-winning actress Susan Sarandon has two small dogs, she did not always consider herself a dog person. Sarandon was once a cat lover, but her daughter’s allergies could not agree to such a strong feline presence in the home, eventually resulting in a cat evacuation which, unbeknownst to Sarandon, the family wholly welcomed. “My son was very attached to cats, I was very attached to cats…[but] after they left, we found out that everyone hated them. The truth came out like when you break up with your boyfriend and afterwards everyone says I hated him. Well it turns that everyone hated them except for [my son] and myself.” Luckily Sarandon’s daughter picked up something the whole family could agree on, a hypoallergenic Pomeranian Maltese mix named Penny. 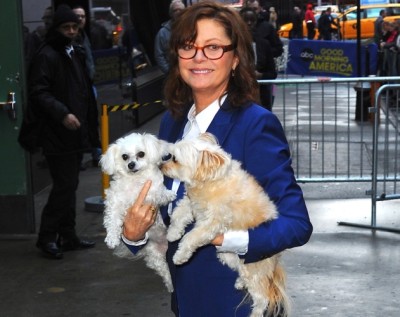 Once Penny joined the family, everyone (including actor Tim Robbins, Sarandon’s partner) settled down to have an “American Idol” style elimination round to choose a name for the new dog. “There were five of us, so we had five names and we started eliminating… and it got down Kujo, Kong, Coco and Penny.” Sarandon had the tie-breaking vote and realized the pooch had to live with said name for the rest of its canine life, so she couldn’t give the dog a “joke” name, telling herself, “I can’t vote for Kujo! I have to name it Penny!”

Sarandon and her family later found another hypoallergenic dog to join the family, after all Thelma has got to have a Louise. The new dog was donned Rigby, another Beatles-inspired name. “We had the same excruciating naming process. Tim does like naming dogs people names for some reason, but I love naming dogs like Sally and George. For me, that’s really funny. But he’s real principled about that, so Penny and Rigby were fine as far as he was concerned, as long as there was a Beatle theme.” 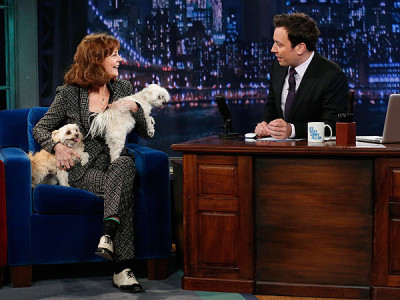 Sarandon likes to keep her dogs down to earth. Penny does go on-set, but Rigby is not yet allowed, for she “still eats everything she can find… every wire, every pill, anything.” And although Penny does sometimes sit on the laps of the directors, Sarandon strives for her dogs to have a more refined look. “People ask me, do they have grooming issues? So I guess I have grooming issues cause I don’t like them blown out looking really perfect. I keep them kind of rough and tumble.” 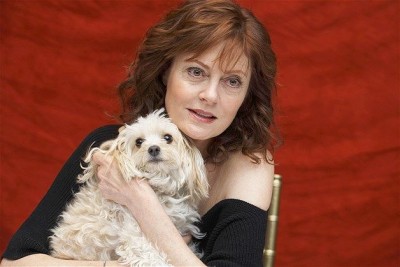 As for working with animals on-set, Sarandon believes, “It keeps you on your toes.” Most recently she worked with Chimps in Speed Racer and had a blast. “The Chimp immediately loved me…he must have sensed my mommy vibe and cuddle up and came right into my arms immediately… actually the Chimp steals the movie!” Unfortunately Penny wasn’t allowed on-set that day. “It was too confusing… if [the Chimps] have anything that comes on their own level, they get aggressive.” But Penny and Rigby continue to steal the show at home, and are even allowed on-the-bed privileges with Robbins and Sarandon.