While some canines are content playing fetch, eating plastic or chewing on a tasty bone, Cooper Gillespie, a Welsh Springer Spaniel from New York City, was busy writing a book! With typing assistance from owner Susan Orlean and collaboration with cookbook author Sally Sampson, Cooper is changing the way we think about “dinner time” in Throw Me a Bone, a cookbook catering to the canine palate.

Throw Me a Bone is filled with fifty canine-tested and approved recipes for snacks, complete meals and treats. The recipes can be shared with humans, are simple and easy to make – a small price to pay for the kisses your dog will no doubt lavish upon you afterwards. The cookbook also addresses a main misconception that feeding human food to your dog will encourage your furry friend to beg. According to dog trainer and nutrition consultant Stacey Alldredge, who reviewed the recipes to make sure they were tasty and healthy, “Dogs do not beg for real food unless you feed them from your plate.” With that in mind, make certain to use separate china for you and your canine!

Writing Throw Me a Bone was natural for Cooper, according to Orlean. With no inhibitions, hang-ups or anxieties about book reviews and sales, “he could hardly keep his paws of the keyboard,” Orlean confessed. Of course, it didn’t hurt that Cooper’s “typist” is a best-selling author and staff writer for The New Yorker. Susan Orlean’s best-selling book The Orchid Thief inspired the film Adaptation. If Cooper’s writing continues, Orlean might have to work out a schedule with her dog to make time for her own projects!

With the help of a breeder in Port Chester, New York, Cooper graced Orlean’s life eight years ago. After the death of her beloved Irish Setter, Orlean gave careful consideration in selecting the right breed for her and husband John Gillespie.

“I’ve always loved hunting breeds…I saw a Welshie at a show, I’d never seen or heard of them before, and I knew I’d found my breed. They’re so beautiful, good-natured, healthy, not overbred, and a very handy 45 pounds. And they have freckles!”

No wonder it is said owners and pets resemble each other; Cooper and Orlean both have freckles and silky red hair! But who knew that dog and parent  would be writing together? 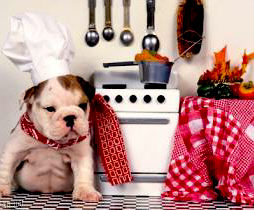 In writing the cookbook with Cooper, who was also the recipe taste tester, Orlean learned about proper dog nutrition. While she doesn’t cook for Cooper every day, Orlean feels that cooking for your canine enables owners to know exactly what their dog eats and the quality of food their dog receives. Orlean also points out that cooking for your dog can be fun and creative. “We’re really encouraging readers to take this as something enjoyable, something that’s a pleasure, not a chore.” Besides, if your culinary skills are lacking, your dog will not be as quick to criticize!

When your canine pal has a case of bad dog breath, bake some “Breath-Sweetening Biscuits” to freshen up kisses. If your pooch has separation anxiety, try “Lily’s Lovely Frozen Parfait,” a known cure at least for Cooper’s friend Lily and her impulse to eat shoes, carpeting and trash while her owner is out! Is your dog feeling under the weather? A warm bowl of “Chicken Soup with Rice” might do the trick. When it’s birthday time, nothing says happy birthday better than a “Bow-Wow Birthday Cake.” Invite your dog’s best pals; they’ll have a howling good time!

Besides his favorite past time of writing, chasing squirrels, picking through trash and stealing food, Cooper’s sweetness, enthusiasm and good nature have taught Orlean an important lesson in life. “He always greets me, and everyone, with a smile, and it gets him far in life. He’s proof to me always that being generous in your soul is the best way to go through life, and gets you a lot in return,” said Orlean.

Why should you try cooking for your dog? A quote from the cookbook by Roger Caras says it best, “Dogs are not our whole life, but they make our lives whole.” For additional information on Throw Me a Bone, visit www.susanorlean.com.

Preheat oven to 350 degrees. Lightly grease an 8-inch square cake pan. Place the tuna, including the water, in a bowl and mash with a fork until the clumps are out. Transfer to a blender or food processor fitted with a steel blade and process until liquefied. Add eggs and extra water, a little at a time, if needed to liquefy completely. Pour into a mixing bowl, add flour and garlic powder, and mix until it has the consistency of cake mix. Spread into the prepared pan and sprinkle with lots of Parmesan cheese. Bake until edges pull away and texture is like putty, about 15 minutes. Turn out of the pan and let cool. Using a pizza cutter, cut into teeny squares. These freeze beautifully. Yield: 64 Serving Size: 2 to 3 Treats