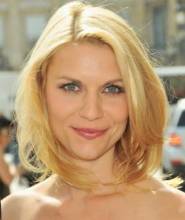 Claire Danes has always been recognized as a very talented actress. She is one of those rare talents to survive an early break into show business as a child star. She has appeared in roles as diverse as Angela Chase in My So-Called Life, as Juliet in Baz Luhrmann’s Romeo + Juliet, as Kate Brewster in Terminator 3: Rise of the Machines and as Temple Grandin in the HBO TV film Temple Grandin. For her work, she has been awarded two Emmy Awards (in 2012 for Homeland and Outstanding Lead Actress in 2010 for Temple Grandin) and four Golden Globe Awards (Best for Homeland in 2012 and 2013, Best Actress for Temple Grandin in 2010 and Best Actress for My So-Called Life in 1994, among others.

She is currently portrays Carrie Mathison in the Showtime series Homeland, a CIA officer, with co-star Damian Lewis as Nicholas Brody, a U.S. Marine. Carrie Mathison has come to believe that Brody, who was held captive by al-Qaeda as a prisoner of war, was “turned” by the enemy and now threatens the United States. The show is based on the Israeli series Hatufim (English title: Prisoners of War).

Danes is a New-Yorker born and raised. Her mother was a day-care provider who later served as her daughter’s manager and her father is a computer consultant and former architectural photographer. Danes has described her background as being “as WASPy as you can get”; her paternal grandfather was the dean of the art and architecture school at Yale University. Danes attended the Dalton School in New York City, the New York City Lab School for Collaborative Studies, the Professional Performing Arts School, and the Lycée Français de Los Angeles in Los Angeles, California. In 1998, Danes went to Yale University. Director Oliver Stone wrote her letter of recommendation to Yale. After studying for two years as a psychology major, she dropped out of Yale to focus on her film career.

Danes is married to British actor Hugh Dancy. The two have a son, Cyrus, born on December, 2012. But baby Cyrus is not an only child! Danes and her husband are also the happy parents of a furry kind of child, Weegee the schnoodle (poodle and schnauzer mix). They’re often spotted walking together in the streets of the city. When she decided to take the role in Homeland, she and her husband agreed that it would be best if she took the pet south to Charlotte, North Carolina, where she lives 5 months a year for filming. “He is wonderful, but he gets really freaked out whenever there are rainstorms, which there have been many in Charlotte. It’s not been the best location” she says.

Let’s hope Weegee soon gets used to his new environment!