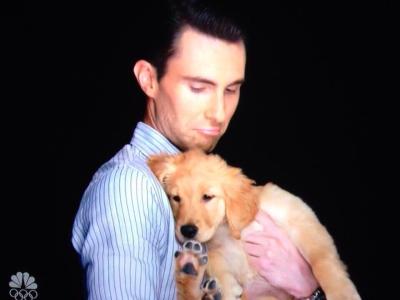 Is there anything out there cuter than Adam Levine? Perhaps Adam Levine with an adorable golden retriever puppy! While filming The Voice  he announced to the audience that he and his then fiancé and now wife Bahati Prinsloo got a new puppy and named her Charlie.

Although adding a new puppy into the family is always exciting Adam got his hands on this cute fella just a short time after his Golden Doodle Frankie passed away. When his precious pup Frankie got sick Adam shelled out $50,000 trying to save him. Unfortunately the dog didn’t pull through, yet he shows us a valuable lesson, to never give up on the things we love! No matter how small or furry. 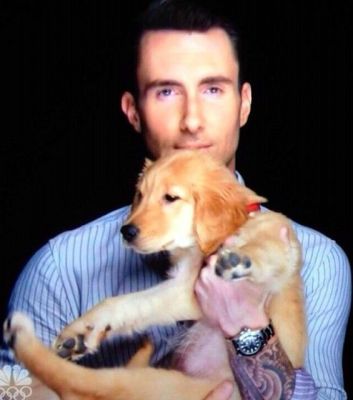 In a statement Adam said “I got to spend my last birthday by the pool with our darling Frankie girl. The bros have lost a major member of the clan today. I will always remember her smiling. That’s the way it should be!!”

Trying to mend his broken heart, he decided to get another companion! (Not to mention an adorable tattoo tribute on his shoulder for his late buddy). However Adam Levine doesn’t just look cute posing with animals! He donates to certain funds such as the Seeing Eye Dogs, which contribute to training dogs to aid blind people. 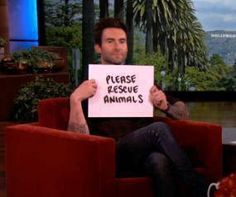 Who doesn’t love a cute musician with a passion for puppies?! Catch Adam Levine on NBC’s The Voice and don’t forget to look out for Maroon 5’s latest album #albuM5 ! (Maybe he’ll write a song about Charlie!)

Check out this video of Ellen surprising Adam with a dog bed for his new puppy Charlie!