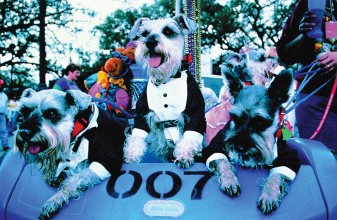 Until last August, New Orleans personified how the Old-World-Jazz culture could fuse seamlessly with a modern charm, the successful combination of nonchalance and vivacity, and a certain je ne sais quoi not found in any other American city. New Orleans has always exuded a sense of being almost otherworldly, and it is perhaps the Big Easy’s ethereal nature that may have helped the city tirelessly attempt to rebuild itself.

The tales of human loss and devastation create an unimaginably heartbreaking picture, while the city’s ability to recover is a testament to triumphing over tragedy. But Katrina’s animal victims are suffering just as much and are looking for the same kind of happy ending we all want to see for the residents of New Orleans.

Refusing to be deterred by even the most harrowing circumstances, The Humane Society of Louisiana (or HumaneLA), has been working tirelessly and eagerly to save New Orleans’ animal population. Jeff Dorson, the humane society’s director, said that the organization “is about animal rescue one-hundred percent” and has been doing everything within its power to make as huge of a positive impact as possible.

Louisiana’s humane society had just purchased land in Mississippi to use as an evacuation site in case of an emergency; this purchase came mere months before Katrina hit. According to Dorson, Humane LA’s members were prompted to buy this land when they began “sensing that the group and its animals would need an evacuation site,” and it’s a good thing they acted out on this inclination.

“Less than 48 hours before Katrina landed, the staff members of [HumaneLA] – all four of them – loaded up three mini-vans with one-hundred of their sheltered animals and drove toward Tylertown, Mississippi, the site of our evacuation center,” Dorson explained.

Once Katrina finally loosed her grip on southern Louisiana, HumaneLA’s workers made their way back into the shambles of New Orleans, even hiring two local fishermen so that the humane society would have access to flooded areas. But HumaneLA wasn’t the only guardian angel of so many distressed and displaced pets. Answering a call for help, people all across North America were sending in both monetary donations and supplies, as well as volunteering to assist in the animal rescue effort. “Over 400 volunteers from 25 states and Canada found their way [to us] and all of them helped in the efforts to rescue, rehabilitate and re-home the animals that we could save,” Dorson said.

A few months later, HumaneLA is still relying on Camp Katrina to provide a refuge for rescued animals, regardless of the tragedy from which they are saved. “[Camp Katrina] is still in operation and over 40 dogs and 50 cats rescued from Katrina and Rita are still housed there,” Dorson said. “The humane society plans to upgrade the facility and keep it open year-round and use it for a staging area for the next national disaster.”

While New Orleans is still clearly in the throes of post-Hurricane Katrina recovery and parts of the city are struggling to revive themselves, signs of restoration are pillars of hope in this tragic time. Residents have been trickling back to reclaim both their homes and their lives. The debris is being cleared out and the ruins are being restored day by day. Businesses are throwing open their doors again. Hollywood has even ventured out to Louisiana, as stars Sienna Miller, Hayden Christensen, and Jimmy Fallon were among the cast and crew of Factory Girl celebrating the film’s wrap-up in Shreveport, which is also where The Guardian, starring Ashton Kutcher, is being filmed.

Fortunately, New Orleans is both prepared and eager to cater to tourists and their four-legged friends. While many hotels aren’t ready to reopen yet, Starwood Hotel’s chain of Sheratons and W Hotels are back in business. Sheraton New Orleans, located on Canal Street, is the first fully operational hotel to re-open in New Orleans. Dog-lovers will be thrilled to know that Sheraton New Orleans will happily allow its guests to bring their canine companions along for the trip.

The two W Hotels located in New Orleans – W French Quarter and W New Orleans – have gone to extraordinary lengths in their efforts to pamper vacationing pets. W Hotel guests’ pets will receive a Welcome Package, designed for either a dog or cat, that includes a toy, a treat, a pet tag, clean-up bags, and a letter detailing the services and additional items that are all available for the hotel’s quadruped guests. Upon entering their rooms, pets will be welcomed with a custom pet bed, food and water bowls with a floor mat, pet-in-room door signs, and a special treat after every turndown.

If that isn’t enough, the W’s concierge can help arrange for a whole roster of services, including dog-sitting, dog-walking, directions to the nearest dog parks or dog runs, local veterinarians, grooming, locations of the area’s pet stores, and even birthday cakes!

Pet-friendly hotels are the purr-fect place to reside with your pet all through the year, and especially appropriate during the annual Mardi Paws celebration!

What is Mardi Paws? After a nerve-racking experience with mischievous pets during the Mystic Krewe of Barkus, the large-scale Mardi Gras dog parade held in New Orleans, Denise Gutnisky and Donna Beakley decided to hold a festival for pets right in their own neighborhood. Eleven years later, Mardi Paws is still “a family affair with an emphasis on costuming,” according to Gutnisky, though its growing popularity and increasing number of participants have forced the celebration to seek out a space that’s a little larger than the founders’ housing development.

Mardi Paws aims to entertain children (and children-at-heart) and animals alike with its low-key “walking parade” that features elaborately costumed pets and their families, floats, and annual themes.

The 2006 Mardi Paws found its inspiration in the Chinese Zodiac calendar: “Year of the Dog”, showcased all sorts of Chinese breeds, including Shar-Peis, Pugs, Chinese Cresteds and Chow Chows. Mardi Paws isn’t all about merely letting pets indulge in the festivities, though: it’s fun that helps give back to the community. Gutnisky’s own non-profit organization, Have a Heart Thru Art, along with local animal welfare groups, benefit from the fund-raising efforts of Mardi Paws.

According to Gutnisky, Have a Heart Thru Art’s mission is to “make a difference in the lives of underprivileged and disabled children in our community by exposing them to the arts” while also drawing upon local performing, literary and visual arts to enrich the community’s cultural life.

The Mystic Krewe of Mardi Paws

Have a Heart Thru Art