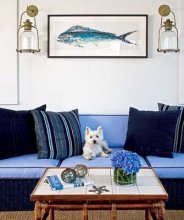 Mary Foley and Michael Cox of Foley & Cox Designs are certainly not networking to the dog interior design industry. This residential interior design firm has created everything from a black and white, trophy-laden “Poodle Room” for one client to a dog bed upholstered in the same fabric as a favorite sofa for another.

For their latest pooches undertaking, this teal of eight designers simply drew upon the lifestyles of some of their upscale Upper East Side clients – dogs included. “At the time, we were working on a couple projects on the Upper East Side for people whose lifestyles were all about having a house in the Hamptons and a house in the city,” says Cox. “We thought, what if we came up with something that reflected their dog going back and forth through these worlds?”

Cox, however, doesn’t just practice canine friendly interiors in his business; he also brings his innovative ideas to his own Chocolate Lab, Athena. The designer’s Hamptons dwelling includes some extra additions that improve the quality of life for everyone, including his beloved pooch.

“We have a sofa in the country that we upholstered in chocolate mohair seat cushions so she can jump up on it, be comfortable, and not cause a big mess,” he says. Cox also designed a spare room in his Hamptons home with what he calls Athena’s “own little what no,” an open shelving system that houses the dog’s many toys and playthings. “It’s a piece of furniture that we’re kind of given her… it’s like her own little display case,” he says. “We cater to her and design around her a little bit.”