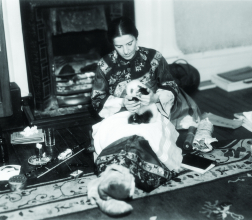 In a society where comfort and established routines are highly valued, our tendency to approach major life transitions with hesitation comes as no surprise.  However, passion is the most potent pharmaceutical and as exhibited by 1930’s dress designer, Ruth Harkness, it can provide the physical and emotional energy essential to embark on an unpredictable journey involving a drastic change in lifestyle.

Gaining access to a collection of personal letters between Harkness and her dearest friend, Boston Globe’s “Animal Beat” journalist, Vicki Constantine Croke, flourished with every crumb of information she unearthed about this zealous woman.  In her latest book, The Lady and the Panda, she reveals the untold tale of Harkness’ evolution from “bohemian socialite” to bold adventurer.

In an era when Paris was the fashion capital of the world, Harkness’ days in Manhattan consisted of crafting formal tea dresses and traversing the busy island, hopping between cocktail parties like a frog employing scattered lily pads to cross a pond.  Harkness craved adventure and when faced with her husband’s overseas death, she clutched the chance to complete his unfulfilled mission.  Questing to the jutting peaks and rampant rivers bordering China and Tibet, Harkness endeavored to capture and safely bring a live panda to the west.

In New York, Harkness rescued stray cats, swooned over dogs, and even kept a pet monkey.  “If an animal ignored her, she became heartsick,” Croke explains.  But Harkness’ devotion to animals was deeply strengthened once she held a panda in her arms and joined the blooming wildlife conservation movement.

Initially, Harkness strove to transport mated pairs of giant pandas to America to establish a safe population here.  After her early success of capturing a panda, “It was like a gold rush!  Hunters came out of everywhere to try to match her and she was worried about how pandas were being trapped and the deplorable conditions they were being kept in,” Croke exclaims.  Harkness saw that pandas weren’t doing well in captivity and according to Croke, this “awakened her desire to protect animals.”

Dissatisfied by her realization that panda hunting was an exploitative business focused on stuffing and pinning the wild beasts to walls to flaunt as trophies symbolizing domination, Harkness returned a captured panda to the wild on her third trip to China.  Sacrificing everything for pandas – from her clothing that she ripped up as bedding for Su-Lin, her first panda, to all support and funding she would have received if she brought her final released bear to the States – Harkness’ behaviors were consistent with her values and belief in the intrinsic value of animals.

Although Harkness’ journey began as a quest for adventure, it transformed into a personal mission and an excavation of her own soul.  She satisfied her creativity by meeting and working with Chinese tailors, adopting oriental patterns and silks in her designs while tossing in American flair.  She successfully contributed to wildlife conservation and immersed herself in the Chinese culture, commenting, “No smile ever went unreturned.”  As Croke mentions, Harkness was guided by the philosophy of a character in a Chinese novel by Lin Yu Tang: “When you yourself are right, nothing that happens to you can be wrong.”