Despite a jam-packed tour with Matchbox 20, among other public appearances and projects, singer and musician Rob Thomas still makes time to give back to animals – particularly those at Pets Alive, America’s first no-kill shelter located in Middletown, New York. Here, he and wife Marisol have spent endless hours feeding, tending to and playing with abandoned, abused and hard-to-place pets.

Pets Alive focuses on rescuing, rehabilitating and finding suitable homes for special-needs animals. In operation for the past 30 years, the shelter houses over 125 dogs, along with cats, kittens, goats, pigs, horses, cows, and chickens. 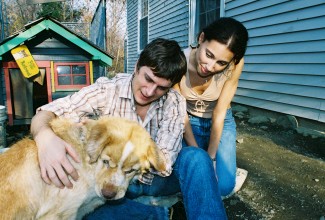 Headed by Sara Whalen, the sanctuary is the only existing retirement home for New York City’s carriage horses. One of Whalen’s most loved companions on the farm is named Timmy, a carriage horse who maintained a steady workload on the streets of New York City.

“His legs finally couldn’t handle the stress of the streets and he became lame frequently. His carriage driver did not want to send him to an Amish farm where he would become a plow horse, so he asked if we could provide a better alternative,” explained Whalen.

Sadly, however, Timmy was diagnosed with osteomyelitis, an infection in the coffin bone, a small bone in the hoof. “With the help of an extremely generous and committed supporter, we were able to bring Timmy to the New England Equine Clinic to try and correct his problems,” said Whalen. Since then, Timmy has undergone two surgeries and is now comfortably recovering back at Pets Alive. 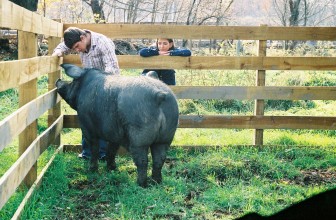 It was fate that brought the Thomas’s to Pets Alive. Rob explained that he and Marisol were searching for a place that was close to home and would allow them to come and spend some time with animals. What they found soon became an enormous part of their lives as pet lovers and animal rights supporters.  But, their gift back to the animals is even greater.

“Rob and Mari visit us often and are such a delight here at Pets Alive,” said Sara Whalen. “The animals here remember them and love them, mainly because they have spent more than just a few hours here with them.” 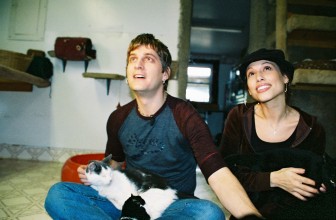 One cow, a male named Buddy, responds to Rob when he calls his name! After hearing Rob call after him, Buddy hurries, in excitement and often plants a kiss right on Rob’s face – one true sign of gratitude and friendship. One pig, coincidentally also named Robert, listened closely as Rob sang the classic tune, “Old MacDonald Had a Farm.”

The Thomas’s are certainly not a couple who are afraid to get stuck in the mud! Rob and Marisol can often be seen playing with the animals right in their pens, indoor and out, helping to restore the love these pets deserve.

The famed couple has one cat named Calvin and plan to adopt more pets in the future when their travels allow them to do so.

“We want to be able to be home with our pets and not have to board them when we’re on the road all the time,” said Rob Thomas. 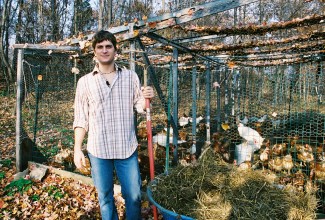 So for now, Rob and Marisol will remain special guests and visitors to their friends at Pets Alive, with their efforts never to be overlooked.

The shelter is continuing to raise funds and awareness every day, though it is a struggle. Every penny that is donated to the sanctuary goes directly to the animals, with none left over for advertising or fundraising events. Staff at the shelter work on a volunteer-only basis and are never paid for their hard work and dedication. Pets Alive welcomes volunteers of all ages and will gladly accept donations for food, shelter housing care, repair efforts, and medical care.