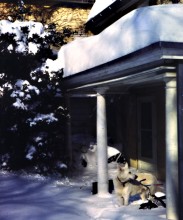 Eric is not an albino.  He has deep brown eyes, not pink.  His coat is lustrous white.  His ghostly color doesn’t signify a genetic flaw, but a higher order of pure breed. Everyday I’m more convinced that he embodies a rare, immortal strain of German Shepherd. How could I not be?  He was born just a few weeks after me – over three decades ago – and in my heart I know he’s still going strong. The woman who gave us Eric had a good heart. She made my dad promise to build a pen big enough for him to have space to run. Dad kept his promise but he had no know idea that a cage wouldn’t hold the likes of Eric. Shortly after we celebrated our first birthdays, the young dog learned to dig his way out. He’d celebrate his escapes by running off for a day of dog adventures. Only when my parents stopped bothering with the pen did Eric generally stick around more often. He’d run off only after doing something naughty. Maybe he’d knock over the birdfeeder when trying to get at a chunk of suet. Or maybe he’d chomp a big hole in Mom’s best tablecloth, where a boat of gravy overturned. As the years gathered, so did Eric’s infractions. His most memorable occurred the Christmas when Mom left the roast turkey on the oven door and she returned to find something that looked like the ribbed prow of a skeleton ship instead. We thought he had run off (realizing his misdeed), but we found him in the den, his head on his paws, his holiday ribbon askew, with big guilty eyes looking up at us. We made do with stuffing, mashed potatoes, creamed onions, brussels sprouts, and omelets that Christmas. Generally Eric was still a very good dog, and in keeping with the spirit of the day, we let him lick the plates. The last time he ran off, we couldn’t figure out why. He’d done nothing wrong.  After dinner I repeatedly called out for him.  We were both fourteen, my best friend and I. Hip dysplasia had slowed him down some, so I doubted he’d venture far. And his whiteness made him easy to spot in the spring night. But I couldn’t see him anywhere that evening. The next day, it seemed that even the birds were looking this way and that, searching for and missing the large white creature whose fur they had lined their nests with in previous springs.  When Eric began shedding, Mom pulled out the loose clumps outside in our yard, helping to relieve him of his winter coat – before it frosted her carpets. From a window I’d watch the clever sparrows fly away with the tufts in their beaks. We got a lot of snow the Christmas after he disappeared. I knew Eric was still out there, his bony legs sinking in deep when he tried to get on top of the snow’s crust. In my mind I saw him snapping excitedly at the swirls of snowflakes falling from all directions, lifting his muzzle and smelling the snow. Come spring, I knew he’d shed his fur even if Mom wasn’t there to pull it out, that somewhere the sparrows’ nests would always be cozy, thick and white. And Eric’s coat would be forever pure as the driven snow. For the Best that Pet Lifestyle and Animal Welfare has to offer follow Wendy Diamond on Facebook, Twitter, and right here at AnimalFair.com!