People have long been taking advantage of the benefits produced by water-based aerobics, especially when it comes to rehabilitation. Racehorses have been utilizing equine aquatic programs for conditioning purposes for over a decade, and now dogs are lapping up this non-load-bearing regimen, known as hydrotherapy, for their own post-operative and rehabilitative needs. 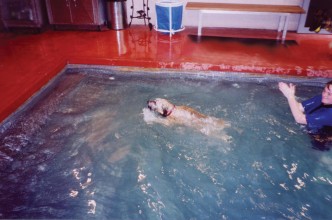 “You’re rehabilitating the limb without having that animal taking [on] the full weight of its leg because you have eliminated the effect of gravity,” says Terri Schiller, a surgeon at the Animal Care Group in Vancouver, British Columbia.

Some of the most common canine ailments hydrotherapy helps to rehabilitate include hip dysplasia, cruciate ligament damage and back injuries. Hydrotherapy also helps to build/tone muscles prior to a surgical procedure, assists in weight loss, athletic performance and prevents post-operative muscle waste, which, according to the U.K.-based Canine Hydrotherapy Association, can begin within three days of a dog becoming immobilized.

Canine or equine hydrotherapy enables the animal to move its limbs in a buoyant environment without putting any weight on the rehabilitating limb.

“On land, each footfall creates a shock wave which travels up the limbs and is then absorbed by bones, tendons and joints,” states U.K.-based National Animal Health, an information source on veterinary therapies. “While these stresses are necessary to maintain healthy, strong bones, if overabundant, these shock waves can actually damage or weaken the limb, particularly an arthritic joint or one recovering from an injury or surgery.”

“The whole idea of hydrotherapy, especially if [the animal has] had an injury, is you want those muscles to be ready when the nerves are finally healed and be able to finally do their work again,” says Susan Marino, director and founder of Angel’s Gate in Long Island, a residential hospice and rehab center for animals.

While research is continually being conducted on human paralysis, animals are also beneficiaries of its finds. “Years ago when an animal was paralyzed, the animal was put down,” adds Marino. “They used to believe that once a spinal injury occurred chemicals were sent out and a portion of the brain was actually cut off. But now, [thanks to research] we know that’s not true.”

“For your muscle to be healthy there has to be a voluntary movement on your behalf to actively move that leg,” says Schiller. “To try and pull your leg away and get the most out of the little bit of functionality is much easier to do in the water than on land.”

While post-operative rehabilitation leads the canine hydrotherapy charge, the battle of the bulge is also heading into the pool.

“People always try to do the right things for their pet. So they give them very good, high quality food, and they give them lots of it. So a lot of our pets are overweight. That in itself creates a lot of potential orthopedic problems,” Schiller says.

Hydrotherapy pools are used for two reasons when it comes to battling canine obesity. “One, just for health reasons – to try and get them to a better weight. Two, if these dogs have an injury, it’s trying to get them in a better state of health, to try and get the weight off of them before they have surgery. The likelihood of a successful surgery, without major complications, is going to be much better than if you try and do these procedures on this grossly overweight dog that cannot get up and move because [it is] too heavy,” she says.

“Under water, the chest is under pressure from the weight of the water squeezing inwards. This means every breath requires more effort – the muscles, particularly in breathing in, have to work harder. As any muscle strengthens with exercise, this improves the whole respiratory system,” says Natural Animal Health. Which is why many performance dogs are cross-training in the pool.

Like human athletes, performance dogs need to cross train in order to keep their minds and bodies in peak physical condition.

“I don’t like running my dogs on the ice, so they lose the [speed] they gained during the summer,” says Hounsell, who resides in Canada. “Going into flyball after the winter, sometimes you really notice the speed has dropped. But this year you couldn’t even tell they were off [during] the winter.”

Trainers are also finding that because swimming is non-weight-bearing, older dogs are also able to reap its benefits and remain competitive well into their golden years.

“I have a 12-year-old Schauzer,” says Randy MacPherson, captain of the Acme flyball team, in Ontario, Canada. “Schnauzers are not known to be strong swimmers, or swimmers in general, but these guys just love it. And at 12 years old, he can still do flyball and agility.” Like humans, dogs must build up their endurance for an activity, and a dog’s enthusiasm doesn’t always equal its fitness level.

Carol-Anne DeVenne is an Ontario-based veterinarian and a member of the Ball der Dashers flyball team and she cautions people to start their dogs off slowly. She says to start with a four to five-minute swim, then take the dog out and walk it around the pool deck to prevent its muscles from tightening, then go back in for another four or five-minute swim. She recommends repeating the cycle for 60 minutes, while continually watching your dog closely for signs of fatigue. If it’s having trouble, says DeVenne, get your dog out of the pool. If the dog swims daily, the swim time can be increased by two or three minutes a week. However, if the dog swims only once a week, swim time will increase more slowly.

“I think where you’re going to get injuries is where the dogs are not in shape,” says DeVenne.

When the dog becomes a very strong swimmer, you can boost its fitness value by providing some resistance with the dog’s lead in an effort to make it swim harder. Another way to toughen up the workout is with a little competition.

“As goofy as this sounds, when you have two or three dogs abreast of each other – swimming down the runway – you can see how the dogs want to stay ahead of the other dogs,” said MacPherson.