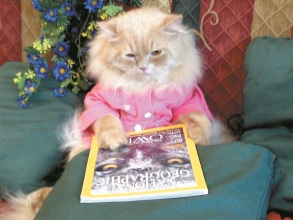 Can your cat balance your checkbook? Converse in several languages? Wrestle with Pythagoras?

Cuty Boy, a Persian cat with human qualities has been making the news all over the Middle East with his colossal super brain. The caramel-colored kitty can not only count and identify objects, but has also developed into something of a polyglot, fielding questions in any number of tongues.

When Hema Chandra, of Indian descent, purchased Cuty (a European import) in Dubai, the reclusive kitten didn’t appear to be anything out of ordinary. If anything, Hema was disappointed that her little feline fur-ball bordered on the anti-social, ensconcing himself in a dark corner of her flat.

Determined to bond with her aloof kitten of sixteen weeks, Hema carried Cuty around her flat and encouraged him to look at various objects in the room, while she called their names (“Fan,” “Light,” etc.). From Cuty’s expressive eyes, she concluded that he was taking in the information like an eager student.

This behavior baffled Hema, but it gave her the idea to purr-form a series of Doctor Dolittle-like experiments with Cuty, slowly training him to nod his furry head at the objects she named and pointed at.  Once Cuty mastered the lay of the land, Hema took Cuty to her neighbor’s homes where he proved he could identify the same objects in different environments.  Everyone was impressed with his human qualities.

And this was just the beginning.

Cuty proceeded to identify body parts, colors, and took orders such as “lie under the ceiling fan” and “go into the living room” in five languages.

Using Helen Keller and Keller’s gifted teacher Anne Sullivan as role models, Hema took the next step – she insisted on answers.  First, Hema challenged Cuty to indicate “no” in a simple experiment with stale food. Hema firmly told the cat, “No, you shouldn’t eat this food.”  Cutey obeyed, but Hema wanted a signal from the cat that meant “no.”

Cuty was a quick study, indicating “no” each time by tilting his head back. Cuty’s cheek against Hema’s cheek meant, “yes.”

“I have grown up with cats in Kerala and adore them,” Hema told Joanna Langley of the Gulf News, “But I’ve never come across anything like this.  I don’t know where he gets this talent.  It is a complete mystery but we’ve tested him thousands of times and know it can’t be coincidence.  I taught him numbers up to twenty. He showed he could count by touching my face lightly with his nose the correct amount of times. He even knows the left cheek from right cheek. I thought I’d stop teaching after twenty, an enormous number for a cat to take in, but now we’ve progressed to complicated arithmetic, and he was right every time.  However, when the numbers were too big for him to count, I displayed a range of answers on cards and he indicated which ones were correct by twitching his tail and looking at them.”

Sahadevan Panicker, a mathematician at the Gulf Modern School in Dubai who supported the bizarre findings, described Cuty-Boy as “extraordinary,” saying, “I don’t know how that animal does it but he certainly has some peculiar gift with mathematics.  I spent just 10 minutes testing him with algebra, geometry, Pythagoras, and square roots, and he was right every time!”