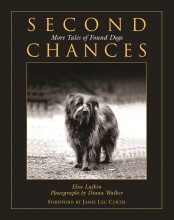 Elise Lufkin and Diana Walker have compiled stories about compassionate people who find it in their hearts to pick up stray dogs off the streets or from animal shelters and give them Second Chances. All the dogs saved are very unique and special in some way, whether they are lame, blind, ill or simply unwanted.

Once the dogs have been saved, many from death’s door, they become overly affectionate and grateful to have found such loving homes. Often the dogs become productive members of society, whether it’s as a service dog, search and rescue dog, or therapy dog.

Second Chances is full of expressive photographs of the owners and dogs, including the heartwarming stories behind each photo. The dog tales include celebrities such as Jamie Lee Curtis with Frances, juxtaposition amongst other celebrities, writers, publishers, designers, photographers and everyday people who have found a kind place in their lives for dogs that would have otherwise been left alone, without much of a future.

Animal Fair’s Lucky Diamond has her own story and photo in Second Chances. Wendy Diamond, publisher of Animal Fair Magazine, rescued her and Lucky still deals with occasional bouts of separation anxiety but has taken on more secure roles as mascot and columnist for the magazine.

Lucille, a Chow, stumbled on to Mike Mills front yard in really bad shape. She had been in an accident, limping and filthy with a bad case of mange. Mills called Animal Control, because Lucille was unapproachable. Animal Control picked her up and the next day Mills took her to a vet to be spayed. The vet said that Mills saved Lucille’s life because she was bleeding internally from the accident, and had been shot in her tail, obviously abused and then left to live on the streets. Now, Lucille lives with Mills and has a gorgeous healthy coat and secure life. Lucille is still very nervous around strangers and wouldn’t let Mills touch her for quite a while but eventually learned to trust her new home.

Anna Deavere Smith found Memphis at the North Shore Animal League when she was just a puppy. Memphis is part Australian cattle dog and multicolored. Smith calls her the Diva Dog. When Memphis was still very young, Smith moved them from New York to Los Angeles. Memphis was instrumental in making Anna feel comfortable in her new city. In tribute to her dog companion Smith would like to write a book called, Memphis Goes To Hollywood. Smith expounds, “She could talk about Hollywood and say things that I couldn’t. People would receive it better from the mouth of a dog, because they love dogs and they trust them.”

Bobby Blue is a seven-year-old Samoyed, and dog healer. Peter Howe adopted Bobby Blue from Samoyed Rescue on the Internet several years ago. Howe took him to obedience classes immediately, where the trainer suggested Bobby Blue would be perfect for pet therapy. And that’s exactly what happened, he was evaluated and certified. Bobby Blue’s day consists of going to hospital pediatric wards and using his presence to distract children from the pain caused by their serious illnesses. Howe explains, “These kids are going through a terrible time, but they have such spirit. And Bobby helps them.” For more information on pet therapy contact: The Good Dog Foundation and Animal Assisted Therapy website: www.gooddogfoundation.org.

A   few years ago Pete Traynham was covering a big flood in Neuse River, North Carolina when a flea ridden, worm-eaten, black and white, skin and bones little dog, jumped off a rescue boat and picked Traynham out of a crowd. The dog didn’t respond to any one else but Traynham. He called his wife Kathe and asked if he should bring the dog home. She agreed, knowing that Traynham had just lost his previously cherished dog eight months earlier. They named their new dog, Neusey, after the river. Neusey had definitely been abused and was still shocked from the flood. Pete and Kathe Traynham took their time acclimating Neusey to her new healthy home by using attention, love and patience. “…Then when Neusey showed up, a new dog seemed like a big commitment. As it’s turned out, she has been a gift. She is such a happy dog, she takes me out of myself and helps me to just enjoy my life,” Kathe Traynham reflects.

On the road to his Dominican Republic home, Oscar de la Renta noticed a fisherman with a bag in his hand. Oscar de la Renta stopped, looking to buy seafood for dinner, but to his horror the man had a puppy in the bag. He told the man to hold the pup and don’t do anything to it. He sped home to tell his wife Annette. She made de la Renta turn around immediately and pick up the puppy. The de la Rentas named their newest addition Cinco, because they adopted him on the fifth of December. Besides Cinco, they have two dogs and six others in the Dominican Republic they’re trying to place. When describing their dogs, Annette de la Renta comments, “They are all wonderful in different ways. Cinco, I think, is the most grateful. Lucky, on the other hand, thinks that we’re lucky. And he’s right.”

Kathryn Walker takes us through her history of dogs starting with Flea (or endearingly called Nell), a Chihuahua she rescued when on set shooting a movie in Virginia. They were inseparable for fifteen years until Flea passed. A friend convinced her to get another dog after the despair of Flea’s death. Next, Walker adopted Oliver, a three- month-old rat terrier, an adorable guy and a lot of fun but she started missing the face of a Chihuahua. She contacted PAL Humane Society, and on Walker’s birthday they called and said they had a dog for her, a Chihuahua mix, that she adopted, named Agnes.” When she (Agnes) arrived she was shaking all over, terrified, but within forty-five minutes she and Oliver were madly chasing each other,” Walker shares.