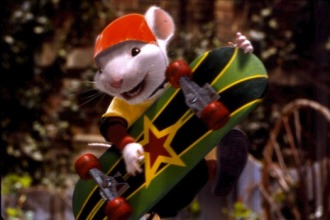 Stuart Little is roaring back to the big screen this summer.  The spunky white mouse with a giant heart and personality, is ready for another larger-than-life adventure.  Now a bone-fide member of the Little family, Stuart will venture from home to the big city to rescue his new friend, Margalo from the talons of an evil falcon.  And by his side will be Snowball, the reformed-villain and now pet cat of wide-eyed and twitchy nosed Stuart.  Snowball’s support (albeit reluctant) attests loudly to Stuart’s charms, as a mouse that wins a cat’s heart is a very special mouse indeed.

Stuart Little was born out of the pages of E.B. White’s book of the same name.  E.B. White, who spun us the classic Charlotte’s Web, came up with Stuart’s character after dreaming about a tiny boy who acted like a mouse.  In White’s book, Stuart was Mrs. Little’s second son, a baby that ‘looked very much like a mouse in every way; only about two inches high, had a mouse’s sharp nose, a mouse’s tail, a mouse’s whiskers and the pleasant shy manner of a mouse…[and] before he was many days old he was not only looking like a mouse but acting like one, too-wearing a gray hat and carrying a small cane.’

In the movie, however, to avoid getting caught up with the issue of how Mrs. Little had a swaddling baby mouse as her second-born, Stuart was adopted from an orphanage.  Although a gray hat and cane befitted a dapper mouse in 1945–when the book was published, the modernized Stuart styles in his trendy bright yellow tracksuit and California skateboard-wear.