High society, in an effort to amuse and outdo the neighbors, celebrated lavishly in the “cottages” overlooking the water. Mrs. Elizabeth Drexel Lehr and Mrs. Stuyvesant Fish were co-hosts at the Lehr’s summer home, Ashleigh, and added their own special element to the staid dinner party.  On the suggestion of Harry Lehr, they invited Man’s Best Friend as the guest of honor.  They sent one hundred invitations addressed to the person whose pedigree most mattered, but indeed, this was a celebration for the canines.

The pooches dressed accordingly for a dinner party at the esteemed Lehr’s mansion. They were outfitted in fancy doggie-wear that most certainly must have accented their owners’ gowns.  They were seated at a low table on the veranda that was comprised of leaves from the same dining set at which their owners supplied.  The masters were relegated to another table, as though their importance was only to transport the animals to and from the occasion. 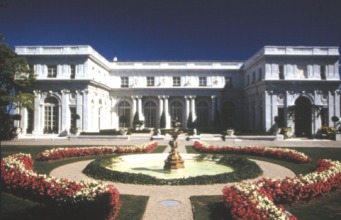 The pups feasted on a three-course banquet of delectable vittles, consisting of shredded dog biscuits and fricassee of bones.  So appreciated was the cuisine that the guests of honor exhausted themselves lapping in the luxury.  One of the dogs was reputed to be carried home in the arms of its faithful guardian, having expended more energy eating than running that afternoon on the nearby Cliff Walk.

A stealthy reporter, accompanied by a decked-out poodle, intruded on the dinner.  Perhaps it was the paper ruffle worn by the dog that upset the hostess, but he was discovered and escorted to the front gate.  Nonetheless, the news appeared in New York the following day, and the affairs of the wealthy were editorialized and denounced.  The Dogs’ Dinner made the papers throughout the country.  Many were not charmed by the improvident excess, as the country was suffering difficult financial times.  The country reacted against the immoderate luxury of the affluent. However, those in Newport prospered and continued to compete and exceed each other’s elaborate gatherings. One party even encompassed another animal guest of honor named Prince del Drago, a couture dressed monkey. 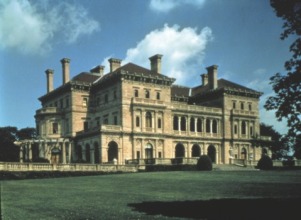 The doggie dinner is now a part of the lore that envelops Newport.  However, the city retains its status as a pet friendly locale.  Though the mansions do not allow dogs, they may be walked on the same cliffs that were once the romping ground for the pampered pets of the wealthy.   From the Cliff Walk, visitors and their dogs can spy the Breakers and Rosecliff Mansions, and imagine what it was like for those who called them home.

The beaches and the Cliff Walk are open to dogs after 6 p.m.  Many of the inns and hotels welcome the four-legged family members.  Also, the festivals that mark the days of summer in Newport, much like those long lost dinner parties, still accommodate and celebrate each member of the family, even the one that barks.