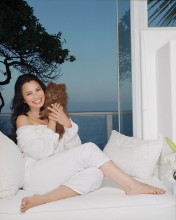 For me, life is loud, hearty, and full to the brim.  Whatever I do, I do with gusto,” says Fran Drescher, everyone’s favorite gravelly-voiced Nanny, in her new book, Cancer Schmancer.   Drescher is beginning life again with a new dog, new love, and new home after being diagnosed with uterine cancer and undergoing the treatments, surgeries and emotional reparations to make her well again.  And she’s charging forward, yet now a bit more reserved.  Drescher says in a softened version of the voice that made her famous, “its quite a life-altering experience when you have had cancer.  Now its all about staying as ‘chill’ as possible.”  She relaxes these days in her Malibu home, a world unto itself, now ” into low stress and enjoying life.”

She is sharing this new life with Esther, a brown Pomeranian, who is “not a replacement” for Chester, Drescher’s canine sidekick of 19 years, who passed away a year and a half ago.  Chester had been by her side everywhere her life had taken her.  From a marriage to her high-school sweetheart, to a violent rape in her home.  From the start of her hit TV series, The Nanny, to a difficult divorce.  From the cancellation of The Nanny, to a new love, and then to the detection of cancer.  Chester had been a stable and calming presence for Drescher, who still often lights candles for him in her home.  “It was really painful. I always said that when that little guy goes it’s going to leave a hole in my life the size of the Grand Canyon.  And it did.”

“It took me about 6 months before I decided that I had to stop looking back and start looking forward.”  “It was hard,” says Drescher, “because I was recovering from cancer surgery.  I had to get a hysterectomy from the cancer.  It was so much deprivation. I didn’t have a uterus anymore, I didn’t have my dog anymore.  I was in that big house.  I didn’t have my series.  I really needed to start anew, start fresh, get my life on a new track.”  She found this renewal in a little being, “so different from Chester,” “quiet,” “dainty,” “regal,” and “elegant”.   Drescher says with a laugh, “after almost 19 years of Chester lifting his leg on my curtains and slipcovers I wanted a companion that would be different-different in energy, different in personality so that it would be new.”  She says she wanted a female this time, “a little dog that I could carry around like a baby.”  “Esther is all about today and tomorrow, not about yesterday-and that’s what makes her so vital for my emotional recovery.”

Esther, named after Fran’s great grandmother, celebrated her first birthday recently with a dinner party at Drescher’s home.  “It was actually three celebrations-my girlfriend Melinda was celebrating her third year of wellness from ovarian cancer, my mom was celebrating her birthday, and then it was Esther’s birthday.  So we had a few friends over-we had a delicious dinner and then desserts-Melinda had a congratulatory cake, my mother had a birthday cake and Esther a birthday cupcake.”

The cupcake was mainly symbolic, as, according to Fran, Esther does not have many of the Drescher traits, and is especially lacking in their family’s passion for food.  “She really isn’t such a great eater.”

On any given night that may mean more for everyone else, though, as Esther, after visiting the veterinarian, was put on a diet of fish, potatoes, rice, carrots, celery-healthy people-food.  “Esther also likes a little scrambled egg for breakfast.  But it can only be like a tiny bit on the plate at a time.  Otherwise she won’t eat it.  Other dogs would woof it right down, but for her, it’s too much.”

Fran describes her pup fondly as a “queer little bird,” suspecting that she may “come from another planet and that’s why she doesn’t have all the ‘dog things’ down.”   Fran goes on, lighting up at the notion, “when they made her, they didn’t quite make her like an earth dog.  Her color is off, she seems like a cat, she doesn’t really jump, she doesn’t really bark that often, she doesn’t like to eat that much.”  Loving the fact that she is learning the ins and outs of this new little being in her life, Fran revels in the fact that the dogs (Chester and Esther) could be so different.  “They are just like people,” she says.

Something that Esther and Fran do share is a love of taking beach walks, which they enjoy when the tide is low and Esther can run, chase birds and stretch her legs a bit.  Summer plans are not so important for the two, says Fran, noting, “every day is a vacation when you live on the beach.”

But every day has not felt like a vacation since this very difficult chapter in her life began.  She says that writing the book, Cancer Schmancer, was hard for her, calling the experience  “painful, and cathartic.”  Drescher says while writing the book she “cried a lot,” “put it off a lot” but ultimately is glad she did it.  She feels that the book will help people, and that by itself gave the project focus, purpose and meaning.  She says, “Its exciting.  We are optimistic.  I have some very important first-hand information.  And I encourage all women to read it.”

Fran says that by the time she finishes her book tour taking her to many US cities, including LA, New York, Miami, and Atlanta, she will be “ready for some luxurious safari life” this summer.  Drescher will travel to South Africa where she will appear as spokesperson for the Foundation of Tolerance.  Then she will get into vacation mode and enjoy the splendor of the landscape.

Fran speaks in an awestruck tone when recollecting past visits to South Africa.  “Its just one of the most moving, spiritual, life-altering experiences I have ever had.  The smell, the musk, the earth, the bigness of the sky.”  She fondly remembers and looks forward to seeing herds of elephants, zebras, giraffes and lions.  She says,  “It’s unbelievable.  They are all out there and wild.  It’s just beautiful.  Spectacular.  And the babies, you just want to reach out and touch them but you know you can’t!”

Although Esther won’t be accompanying Fran to Africa, she will be there in spirit, playing with her monkey beanie baby named Bananas, under the care of Fran’s assistant, a great friend of them both.

Fran is drawing her strength from good friends, quiet times enjoying nature and her pets.  She says that her pets have been a huge part of her continued emotional and physical recovery.  “I tell people if they don’t feel good or if they are ill, they have to have something in that bed with them, and if it’s not a human, get a dog or a cat.  Something to take you out of your misery a little bit.  I think pets are very therapeutic.  I don’t understand people that don’t have any.  It’s a healthy preoccupation that gets you away from the stresses of life.”  More than just a preoccupation, Chester and Esther have been there for her to soften the past, enrich her present and help her plow forward to a bright and healthy future.