Indianapolis has its 500, Reno has its air races and Boston has its Marathon, but all of these death-defying quests for speed pale in comparison to San Diego’s wiener dog run.

This Dachshund dash pits the best-of-the-best of these low-to-the-ground hounds in a madcap 100-foot scramble to earn the title of top dog and a spot of honor in the Holiday Bowl parade.  Not to be confused with show dogs, these hot dogs are serious athletes.  Good looks alone won’t put you in the winner’s circle here.  It takes training, dedication, and crazy humans shaking toys and holding biscuit shaped bribes at the end of the finish line.  “The key to getting your dog across the finish line first is to bribe them with their favorite food or toy,” said dog owner Shirley Hammett.  “My dog, Miss Oliver, is a veteran racer.  Last year she was beaten by a nose, but this year she has her sights set on first place.”

With all ten team members in place, the dogs were taken to Camp Diego in Pacific Beach for a day of advance training and pampering.  It was here that the psychological part of the contest began. Each dog was trying to find a way to get the upper paw on his or her competition.  “You could feel the tension in the air,” said dog owner John Chatwood.  “All the dogs were checking each other out.  Some tried to stare their competition down; others just let go with a slight snarl.  There was a lot of gamesmanship going on.  You could see each dog working on individual strategies.”

As race time neared, hundreds of spectators gathered around the track, eager to watch history in the making.  The pint-size athletes ran several practice laps to get the feel of the track, and to sniff out the crowd.  At least one of the dogs seemed more interested in following the aroma of food than in lapping his opponents.  “My dog Hunter just disappeared somewhere in the crowd,” said Deborah Stechens.  “I think he’s heading for the hamburger stand.”

With everyone in place, the starting pistol was fired and the race was on.  The dogs flew out of their respective gates.  It was a breath-taking finish.  With ears flapping in the breeze the finish line was crossed.  In a record-setting 6.8 seconds the race was over.  The wiener, rather, the winner, was a very fleet-of-foot hound by the name of Lucy with Miss Oliver right on her heels, followed by Long-Rod Johnson who beat out Dixie by a nose. 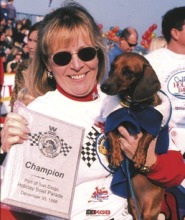 Following the race, the wiener dogs assembled for the big parade.  This year Lucy will have the seat of honor atop the Wienerschnitzel float while her teammates trot alongside of the giant display, each one thinking, wait till next year.