The spirit of giving can take many forms.  Some, like Joy to the World Collectibles and Christopher Radko, contribute to the more “ornamental” side of animal well-being. 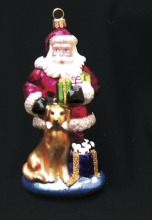 Thank You For Being a Friend

The Morris Animal Foundation (MAF), has been working with Knoxville’s Joy to the World Collectibles since 1998, constructing intricately elegant holiday ornaments to benefit the MAF’s goal of humane treatment for animals.  The hand-crafted, glass blown ornaments are inspired by the Foundation’s global dedication to all animals, wild and domestic.  Most recently the organization has launched a line of dog and cat themed ornaments, with one even bearing a likeness to MAF president emeritus and celebrity trustee Betty White’s Golden retriever, Kitta.  According to Joy to the World president and founder Lisa Kelechava, White’s public devotion to the project draws scads of supporters from unexpected enclaves.

“At the events, college kids pack the place,” she says.  “Golden Girls is apparently a huge cult-favorite on college campuses, so we get a ton of young people who show up, all interested in animal causes.  Who would have thought Nick-At-Nite could help us reach so many people?”

A Tree Falls In Scarsdale

In 1983, while home from college in Scarsdale NY, Christopher Radko accidentally knocked over his family Christmas tree, shattering his grandmother’s army of antique Christmas ornaments.  By 2001 he was hanging them up in the White House.

Sparked by a desperate need to replace what he had destroyed, Radko turned a craftmaking skirmish into a decorative armada of beautiful ornaments to illuminate the yuletide season.  In 1997 the Clinton presidency chose him as the official holiday decorator for the White House, and he has since made several repeat trips.  His now heralded Christmas creations have been the toast of such celebrities as Whoopi Goldberg and Robert DeNiro, and he has donated over $3,000,000 for various organizations, including animal rescue organizations.

“I support pet causes because I grew up with two dogs and a cat,” says Radko.  “Even today with my busy schedule, I’m the proud owner of a Border collie.