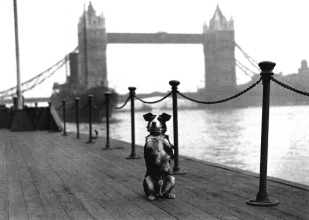 Raymond Merritt, a lawyer by trade, is both an expert on photography and a fan of dogs. So when he was asked to write and co-edit, with Miles Barth, a collection of photography that focused on dogs, it seemed a natural way to combine his passions. A Thousand Hounds (Taschen) is the result.

“It’s not a pretty dog book,” Merritt warns those looking for cute dog photos, “and neither is it an attempt to collect the best of dog photography.” The point of the book is to showcase the significant presence of dogs throughout the history of photography. Photographers, like the many painters before them (Gaugin, Picasso, Warhol, Haring and others all painted dogs), often display their personal fascination with dogs in their art.

“There is no other animal that has so captured human attention,” says Merritt. “Dogs symbolize innocence, bravery, joy and faith.”Merritt confesses that his yellow lab, K.C., has greatly influenced his life. “She goes everywhere with me—tennis, coffee, restaurants,” he says. “I took her to Washington with me for a board meeting, and in the hotel room we had a sterling silver platter brought in with a dog bone and beef-flavored water.” Hotel staff even called and offered K.C. “Frosty Paws,” an ice cream-like treat formulated to agree with dogs’ delicate digestive systems.

Merritt’s concern for dogs goes beyond mere appreciation, however, and he has a very distinct goal for this project. Proceeds from the book will be donated to charity: half to UNICEF and half to animal rescue organizations, including the Humane Society of New York, Animal Rescue Fund and Battersea Dog Home in London. “The goal is to find a home for a thousand hounds,” he says, referencing the book’s title. He’s about a third of the way to his goal, and with the proceeds from the book, not to mention an upcoming calendar, wristwatch and a photo exhibit opening in New York in January 2002, he’s confident he’ll attain that goal.

The 537-page collection is a masterpiece in variety: from journalistic images of dogs in war to sensual portraits of dogs with naked women. Hundreds of artists are represented, including Man Ray, William Wegman and Picasso, and peppered throughout are quotations about dogs and photography.The title of the book comes not from Merritt’s fundraising goals and the number of dogs represented inside (857, to be exact), but from a conversation Merritt had with pre-eminent Mexican photographer Manuel Alvarez Bravo. During the meeting and fighting a language barrier, Bravo was sliding his favorite photographs across the table to Merritt-strangely enough, they were all of dogs. Exasperated, Merritt asked Bravo why. “If I could photograph a thousand hounds,” Bravo said, “I’d die a happy man.”