Always Faithful: A Memoir of the Marine Dogs of World War II

Just when the valiant war dog risked fading into the forgotten fold of American history, along comes a book that reminds us of the horrors of World War II and, more specifically, the loyalty and courage displayed by man’s bes friend in overseas combat.

In Always Faithful, retired Captain William Putney thoughtfully remembers both the men and dogs who fought in Guam and across the Pacific islands by recounting the bond that formed between man and animal amidst such devastating conditions.

Upon graduating from Auburn University, where he studied to become a veterinarian, Putney was accepted into the Marine Corps. After infantry training, he was ordered to the War Dog Training School at Camp Lejeune in North Carolina and eventually became the commanding officer of the 3rd War Dog Platoon during the battle for Guam in 1944. Trained for three basic functions—scouting, delivering messages and ammunition, and detecting mines and other explosive devices—Putney’s four-legged charges led several successful attacks against the Japanese. While many of the canine crusaders survived, 25 of them lost their lives in battle—Kurt, Skipper, and Hobo to name a few. Here, their stories are told.

In his writing, Putney admirably displays a notable amount of respect for these canine heroes who were yanked from the comfort of civilian life and rigorously trained to perform on the front lines, some ultimately sacrificing their lives for the men they sought to protect. Under Putney’s care, these dogs couldn’t have been in more competent, compassionate hands. He is clearly still moved by their bravery, more than 50 years later, and accordingly, the reader is treated to a sincere, dramatic account of a dog’s life in the trenches.

Perhaps this sensitive soldier’s greatest accomplishment lies in his fight for the surviving dogs to be returned to civilian life. Thanks to Putney’s steadfast efforts, over 500 war dogs were successfully detrained and returned home, some to live with their former families and some to live out the rest of their lives with their beloved handlers.

In dedicating his book to the memory of the dogs of the 2nd and 3rd War Dog Platoons, the gentle doctor says, “They embodied the Marines Corps motto, Semper Fidelis.” The same could be said for Putney, who has remained “always faithful” to keeping the war dogs’ memory alive.

The Cat Who’ll Live Forever: The Final Adventures of Norton, the Perfect Cat, and His Imperfect Human

Luckily for fans, Peter Gethers’ well-documented relationship with his beloved cat Norton led to the publication of this, the third and final book chronicling the adventures of the two longtime pals. Readers first met Norton, the endearing little Scottish Fold, in The Cat Who Went to Paris, and were treated to more of this fanciful feline’s escapades in its follow-up, A Cat Abroad. Originally, there was to be no third book because, Gethers admits, he thought

he had nothing left to learn from his cat. Norton, not surprisingly, knew otherwise.

In The Cat Who’ll Live Forever, Gethers once again brings an appropriate mixture of wry humor and raw sincerity to the narrative of his last six years with Norton. He continues to entertain Norton nuts with the high-caliber anecdotes they’ve come to expect, from a post-premiere party with “Tony” Hopkins to a night out at L.A. hotspot Spago, featuring a cat treat pizza prepared by friend Wolfgang Puck. And although in retirement, Norton’s travel schedule didn’t slow down until well into his golden years. In delightful detail, Gethers highlights annual spring trips to the eastern shore of Maryland or the wine country in Northern California; Christmases in Goult, France; dinners in Sicily; summers in Sag Harbor; and, Norton’s favorite, return trips to Paris.

Not until about halfway through the book are we hit with Norton’s mortality—kidney failure and ultimately cancer. Gethers writes with amazing clarity about the emotional toll Norton’s illnesses took on him, providing a tasteful tribute to his best friend. While certainly heavier on the heart than the previous two Norton anthologies, this last installment largely centers on Norton’s life, not death, and even features forays into non-Norton territory. Interesting sidebars include Gethers’ eccentric Aunt Belle, snippets from his varied publishing career, and revelations about his feelings on religion, marriage, and fame.

Gethers’ writing is witty and predictably unassuming. Despite Norton’s longtime popularity, the author still marvels at his pint-size pal’s effect on people, whether celebrities or perfect strangers. And he certainly hasn’t lost his trademark self-deprecation, insisting that his presence remains inconsequential when up against the famous Fold. Regardless of the resulting “feel sorry for me” jokes, Gethers seems perfectly happy having played the role of Norton’s roadie for sixteen years.

Love Stories…of Pets and Their People 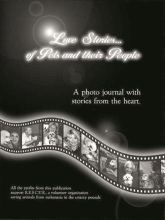 “It is to the six million homeless animals still being euthanized every year in the pounds of this country that we dedicate this book.” With that sobering statistic in mind, how can we not go to our local shelters and spare these healthy, loving animals from such an unnecessary, devastating fate?

Such was the question posed six years ago by Julie Seals, founder of Phoenix-based R.E.S.C.U.E., which stands for Reducing Euthanasia at Shelters through Commitment and Underlying Education. Since then, Seals’ group of over 300 volunteers, along with PETsMART, has saved nearly 6,000 animals, all originally slated for a certain death in Maricopa County’s animal control facilities. How to help this nonprofit organization whose mission must surely be an uphill battle? Publish a book and donate the sales proceeds to them.

Enter Bari Mears and Deanna Biddulph, co-chairwomen of the Rescuers Committee, a group of people from all walks of life brought together by their shared concern for animals. With already one fund-raising publication under their collective animal welfare belt, Mears and Biddulph led their dedicated committee in the production of Love Stories, a coffee table book filled with black and white photos and short stories of people and their pets.

To be sure, these charitable mavens masterminded a flawless fund-raising effort. First, Phoenix-area celebrities and other community residents were offered the opportunity to purchase pages in the book. Then nine volunteer photographers visited the people in their homes to capture on film the bond between human and animal. The result? Several heartwarming, stunning photos with one common theme: Sheer joy radiates from every person pictured in this book, speaking volumes for what their pets mean to them. Indeed, these pages provide affirmation that despite the work that still needs to be done on behalf of the animals, there are some deliriously happy critters out there who mean the world to their people.

Take Bear and Wiley, for instance, who waltzed down the aisle as flower girl and ring bearer in Thom and Polly Brennaman’s wedding. And then there are Nuggie and Larry, two dogs who inspired their person to paint for the first time in her life. And she’s good! (They’ll take all the credit, right?) Several more inspiring stories abound. Celebrities pictured with their pets include Doc Severinsen, Alice Cooper, and Joan Van Ark, along with past and present local sports figures Dan Majerle, Kevin Johnson, and Buck Showalter.

With the holidays upon us, this touching compilation is sure to stir the soul of every animal lover on your list. And most importantly, this is no “portion of the proceeds” publication. Every penny goes to R.E.S.C.U.E., so every book purchased helps save a life. From where the animals are standing, that’s truly a gift that keeps on giving.

Love Stories can be purchased on amazon.com. To learn more about R.E.S.C.U.E., visit their Web site at www.azrescue.org. 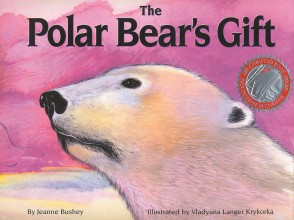 Give and you shall receive. Such is the lesson learned by Pani, a young Inuit girl, in The Polar Bear’s Gift. Intent on following in her parents’ footsteps, Pani dreams of becoming a great polar bear hunter.  Yet when she discovers a wounded polar bear cub on the ice, Pani is confronted with a difficult choice: to help or to hunt.

Inspired by a traditional Inuit legend, this morally rich story of compassion is beautifully illustrated with vibrant watercolors. While the award-winning illustrator is generally known for her use of blue, here Krykorka chooses pink as the predominant color throughout the 32-page book, and with stunning results.  Recommended for children ages 4 through 8.