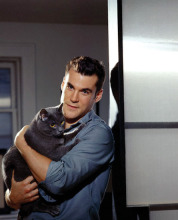 Wall Street financier Carl Icahn is famed for prescribing dogs for those on the Street looking for a friend. For those who aren’t Wall Street wizards, but play on them on television, cats are a viable option as well.

Actor Sean Maher, the hot young star of Fox’s new series, The Street, adopted Nicholas and Maxwell, two gorgeous gray kittens from the Sherman Oaks Vet in Los Angeles last June. “I originally bought them for my mother,” he says. “Our family cat disappeared in May and I was going to bring these guys home to surprise my mom, but I got really attached.”

So the brothers, Nick and Maw, lucked out and got to stay with the striking young actor in his West Village loft. Maher affectionately refers to the beautiful felines as “monsters” but they are more his mates. “I love, love, love coming home to them. They’re great company,” he says. “They add an air of responsibility to my life… almost like a paternal thing.”

Maher is so paternal, in fact, that he hasn’t left his pets home alone for even one night. “I guess I’m a little neurotic in that sense,” he admits, but without regret. The young star will be spending the holidays at his parent’s Westchester home this year and plans to bring Nick and Max along for the family feast.

Sean’s soft spoken and sweet demeanor belies the sexy blue-eyed appeal of this rising star and even more so the cool character he plays on The Street. Chris McConnell is a blue collar ex-Navy Seal who enters the world of high finance as a trader in a New York firm. The only thing the actor and his character seem to have in common is a formidable physique (Maher practices Yoga and works out regularly).

Maher cringes with concern as one of his kittens coughs helplessly in an attempt to dislodge a fur ball. He’s taking mental notes – Vaseline on the paws. At this moment, it’s hard to find similarities between the soft spoken and gentle young actor and his slick, tough character on television. Maher doesn’t dabble much in the market and his investments are carefully guided by his business manager. He only owns one Banana Republic suit as opposed to Chris’ wardrobe full of Donna Karans, Pradas, and Paul Smiths. But he’s learning. “Paul Smith has become my favorite.” Maher says of his new corporate look on the show. “I’m actually learning more about suits than I ever knew existed.”

What he’s also learning is the Wall Street isn’t always what it seems. “As soon as I got the part I rushed down to a huge firm on Wall Street and met with someone,” says Maher. “I’m sitting in the reception area waiting for him and out walks this guy smacking bubble gum with stubble on his face. That become more of the epitome of the show for me. The people, they are just big kids.”

There are a few similarities between Wall Street and Hollywood, according to Maher. He cites just a few. “The ambition, the hunger, the potential for overnight success, the here today, gone tomorrow aspect.”

The show is about the relationships between people, according to Maher, with Wall Street as the backdrop. “It’s extremely witty, very sexy and fast-paced,” he says of the series. The potential for Maher’s overnight success hasn’t escaped him, but he isn’t thinking about that too much. For now he’s excited about the show and hopes viewers will respond to its portrayal this young, fierce Wall Street set. “Women will love it too,” he assures us, hoping to dispel the myth that the business world is all about powerful men.

Speaking of women, Maher doesn’t, but he does tell us that McConnell does well for himself in the romance department. His character has a couple of fling’s according to Maher, and when asked if he enjoys playing them, his big blue eyes get even bigger. “Sure!” he says, as if he were just asked if he likes Nick and Max.