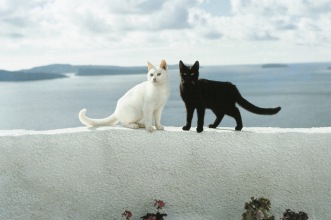 Cats are an inseparable part of everyday life on the Greek island of Cycladic: they have always been there, like the wind, the sun, the sea, day, and night.

Greeks allow no pets in their homes, except for canaries.  Yet the cats are true domestic cats, not abandoned or wild, and they have for centuries shared the lives of human beings.

The Greeks told me stories about their favorite cats during the long hours I waited for the best moment to take my photographs.

The Greeks are very generous in feeding them; fisherman throw them their damaged catch and fishmongers always set aside a portion for them. In return, the islanders hope to be spared the bother of rats and mice.  If you think how quickly mice reproduce, you will realize how important cats are in rural areas for keeping control. 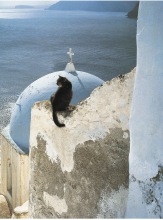 When the great navigators of past centuries set sail to discover new worlds, cats always accompanied them.  Ships’ cargoes were particularly susceptible to rodent infestation.  Cats were as much a part of the equipment as the anchor, the sail, and the compass.  In fact, it was impossible to register or insure a ship that had no cat aboard. The British Royal Navy provided for the maintenance of cats on warships as late as 1975.

In the Greek islands, cats lead a very different life. They live in their own districts.  Within the district, they know every house, garden, roof, shrub, tree and hiding-place.  The village cats know who is fond of them, who tolerates them, and who hates them, and they adjust their manners accordingly.  A rat or mouse is unlikely to penetrate this world unobserved.

Cats form part of the village community, naturally, but they get no more than food from the inhabitants. Greeks do not normally give names to their cats, calling them simply Gata or Gatila (cat or kitty).  Cats within a neighborhood know one another extremely well.  A strange cat venturing into an alien neighborhood is immediately ejected.  Dogs usually know better than to risk confrontation. 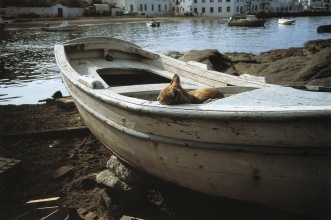 In these communities, there are two sorts of marginal cat citizens.  On one side are the privileged individuals who belong to someone.  While they are not allowed inside the house, the doorstep is theirs; they are regularly fed.  Fatter and less wild, these cats are easily spotted.  At the opposite extreme are those cats that are tramps by temperament and refuse to fit in, scavenging beyond the boundaries of any given neighborhood.  Their diet is irregular.  They are often ill, and they die young.

The more severe and straight-edged the architecture, the less happy the cat.  Cats like free forms, changes of levels, curves, angles, irregularity, and mixed materials.  The white villages of the Cyclades suit them perfectly.  Cats live on two levels – on the flat roofs as much as on the ground, using balconies as springboards to sail across the narrow streets.  When they need to, they can find good hiding places from which to observe the rest of the world.

Our domestic cats are descended not from the European wildcat but from the Abyssinian cat, a native of the African deserts.  Where the cats of the Cyclades came from originally is uncertain, but they must have arrived by boat, a long time ago.  Without their cats, the villages on the islands dotting the Aegean Sea would be different, much less vital, places.

For more information on cats and travel, log onto www.animalfair.com