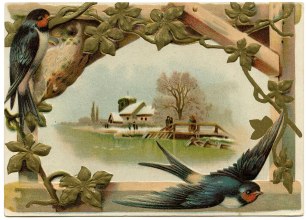 Everyone was sending them and there were plenty to choose from. The official figures from the U.S. Post Office for year ending in June, 1908 cite 677,777,798 postcards mailed during a time when the total population of the U.S. was only 88,700,000.

Interest in postcard collecting in growing with new, avid collectors, both young and old, pursuing their favorite motifs including dogs, cats, monkeys and even frogs. Postcards are the perfect choice for any “animal lover” looking to start a collection. If you’re on a budget, have limited space available for displaying, or if you’re looking for something totally unique that’s also a great conversation piece, consider this.

Postcards have been around for a very long time. In fact, the earliest known post card discovered, as of 1996, is postmarked December 1948. The first government postcards (referred to as “Postals”) were issued in 1873 by the post offices of various countries with an imprinted stamp. A Government card required a 1-cent stamp, as opposed to Private Postcards that were referred to as “souvenir cards” because of their costly 2-cent postage. It was not until 1808 that postage on “souvenir cards” was reduced to 1-cent.

The Postcard boom took off when use of the word “POST CARD/POSTCARD” (as one or two words) was finally granted by the government to private printers in 1901. For the next six years the publishing of printed postcards doubled almost every six months. European publishers opened offices through the U.S. and imported millions of high quality postcards. By 1907, European publishers accounted for over 75% of all postcards sold in America.

Today postcards are fairly inexpensive to collect. According to the Postcard Price Guide, animal topical postcards cost anywhere from $1.00 to $25.00. Over the last few years more collectors have entered the market increasing the demand for and the value of varied motifs. They can be purchased at specialty shows, flea markets, antique shops, yard sales and even on the internet.

Postcards have survived the last 100 years, but the question remains – will they survive electronic mail? Collectors are determined to keep the once popular method of communication a vivid memory at least, and a treasured part of Americana for even the most computer savvy among us at best. There’s little hope that we’ll all go back to the days of postcard mania, but we can always enjoy the wit, beauty and charm of this unique art form.

Shelley McBreairty Blanchette writes for various publications and is Marketing Director for Senior Focus Radio, Director of Operations for Focus Communications and Secretary for President Petie at www.petlovershack.com. Shelley resides in Mystic, CT with her family and three rescue dogs.