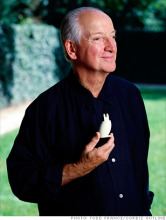 Architect, artist, product designer, pet lover – Michael Graves is all of these things, and not necessarily in that order.

Graves is internationally renowned for his architectural designs which include  the restoration of the Washington Monument, the Hotel New York at Euro Disney in Paris, France, the Humana Building in Louisville, Kentucky, the Nexus Momochi Residential Tower in Fukuoka, Japan, the Pittsburgh Public Theater in Pittsburgh, Pennsylvania, and many other magnificent structures around the world.

You may also know him as the man who created your teakettle. For more than 10 years Graves has been the designer behind the wide array of Alessi home products that have swept the country and found their way into millions of homes across the globe. His whistling bird teakettle has become a favorite of tea drinkers everywhere, selling more than 1.5 million kettles since their release in 1985. He has designed more than 500 products for Target stores and his most recent line of small appliances was released in July.

How does Graves view himself? “I just describe myself as an architect’ he says. “Some people say, ‘be clearer about that’, and I just say hat I am a general practitioner.”

That doesn’t seem o be enough of a description for a man who has been called a member of ‘New York Five’ along four other architectural superstars – Richard Meier, Charles Gwathmey, Peter Einsman, and John Hejduk. Graves may not characterize his work, but he will tell you what others have said: “People have described my work as humanistic, as dealing with myth and ritual. A lot of different words have been used”, he says.

For this Princeton University Architectural Design Professor, words are important – language in particular. “I try to teach language – how to make a plan,” he explains. “It sounds very basic, but other people just don’t teach plan making anymore. I suppose the long and the short of it is to teach the fundamentals and to try to understand the characteristics of architecture.”

Graves will be the first to point out that he does enjoy a certain simplicity in his design. “One of the things that people talk about when they talk about the products I do,” he says, “is not just that they make you smile, but they are not terribly abstract. By that I mean that a lot of product design today is so abstract that you don’t even know which end to pick up.”

Graves’ yellow lab, Sara, sits by his feet while he works and keeps him company late into the night when he draws. “ At least I have some one to talk to,” he says. Sara, as yet, hasn’t talked back!

Five years ago, a friend asked Graves if he would take Sara whose previous owners were in the midst of a divorce and looking for a new home for their pet. “I didn’t say ‘yes’ or ‘no’,” says Graves, “because I always worry about travelling. I don’t like to kennel the dog. A few days, he asked me if she could at least come for a sleepover. So she did – and she stayed forever.”

There was a problem, though. Graves’ daughter’s name is Sarah. “The first person I called was my daughter who lives in Canada,” Graves says, recalling the first day that his new pet arrived. “I told her we have this problem and she said, “Not a problem, just drop the ‘h’.”

Busy traveling around the world for his work, Graves relies on his dog-loving neighbors to babysit Sara while he is gone. “My neighbor’s 2.5 year old son, Liam, loves Sara,” Graves says. Finding a safe place for Sara to stay while Graves is traveling is not a problem. Getting her back is a little bit more difficult. “I called when I got home from Greece,” says Graves, “and I said, ‘Hi Liam, it’s Michael’.” The response was less than enthusiastic. “’Oh,’ he said, ‘What do you want?’”

Graves got his dog back and things wouldn’t be the same around his house if he hadn’t. For Graves, who grew up with pet and whose Princeton offices are filled with five dogs, Sara is a welcome addition to his home. “My life, I suppose, a little more complete in that I live alone and she provides some company,” Graves says of his pet pal.

Graves’ son, and next-door neighbor, also loves dogs and has a Black Lab named Loki. Inspired by the precocious pup Graves calls a “perennial puppy” and whose names means ‘god of mischief’, the architect went to work building a dog house that was auctioned off at a local benefit several months ago. Graves designed the house with a porch on either side reasoning that, “dog houses don’t have porches, so I made mine with two”.

It must have been quite a sight as Graves describes it. “There I was sitting on one side and Loki was on the floor other,” he recalls, “I called it ‘Good Dog, Bad Dog.’”

Dog Houses are not Graves’ only new projects. The pet owner also happens to be working on the Detroit Institute of Arts. “It is part new part renovation, and part restoration,” Graves says of the project which is due for completion in about two years. The Art Museum was originally designed by French-American architect, Paul Cret, in the early 1930’s. “To get to add to one of his buildings is a special gift for an architect.”

Asked if he would ever consider designing an Alessi doggie dish or birdcage, Graves is quick to reply. “They haven’t asked,” he says, “but if I ever have my own shop, I’ll do a whole line of dog products.” The next question was natural – would he let Animal Fair know when he does? “Oh I will,” he says, “I’ll need the press.”