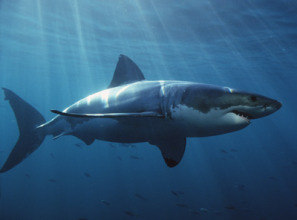 Sharks have been around for over 400 million years, but their numbers have declined over the last 60 years due to overfishing. It’s estimated that 38 million sharks are killed each year by fishermen and sold as ingredients for shark fin soup. That’s more than 100,000 killed daily! At this rate, over 200 species of sharks could disappear forever.

Conservationists are working hard to keep that from happening, however. This Spring, governments participating in The Convention on International Trade in Endangered Species of Wild Fauna and Flora (CITES) voted to regulate the trade of five species of overfished sharks. While this is a victory, there is still lots of work to be done to keep sharks from going extinct.

Leonardo DiCaprio and director James Cameron, along with many other celebrities, sent a letter to California governor Jerry Brown urging him to sign a bill that would ban the sale, trade, and possession of shark fins inside state borders. Dozens of world-renowned chefs, such as Wolfgang Puck and Gordon Ramsay, have also pledged not to serve shark fin soup at their restaurants.

Discovery Channel’s Shark Week is also upon us. In addition to being the longest-running cable programming event in television history, Shark Week aims to raise awareness about one of the world’s most misunderstood species.

There are more ways that you can help sharks other than just watching TV, though! Here are several organizations you can reach out to for more information on how you can make a difference: