William Secord owns the only gallery in North America devoted exclusively  to paintings of dogs.  He’d like to show you around.

The William Secord Gallery doesn’t seem like the kind of place where dogs run free. Hardwood floors gleam with polish. The gallery’s three display rooms are filled with ornately framed art, all carefully hung on walls painted the deep, flawless shades of a Grandparent’s parlor. The decor here is quietly and firmly elegant— the kind of place where nervous mothers might pull their children’s hands away from everything in sight. Walking around while waiting, I allow the plush rugs to absorb my careful steps, and I wince whenever a bare floor creeks beneath my feet. I am surrounded by antique tables and sideboards bearing carefully arranged copies of Secord’s two lavish books, Dog Painting, 1840-1940: A Social History and Dog Painting: The European Breeds.

He greets me. The world’s leading authority on dogs in fine art is a tall man with slicked back hair and a calm face. He wears a dark suit accentuated by a razor sharp, silver silk tie. He stands with his feet together as he shakes my hand, and I notice he speaks with a cultured and vageuly European accent. I then learn Secord is Canadian.

“I grew up on a farm in the eastern part,” He smiles. “With border collies.”

I ask if he prohibits real dogs from visiting the gallery, and Secord reacts as though I have just proposed something against the laws of nature.

“I can’t have a dog gallery without dogs!” he happily declares. “Everybody brings their dogs here.” He describes how his furry guests are welcomed with dishes of water and special biscuit treats. He tells me all this matter-of-factly— pointedly avoiding saying it like he thinks it is cute, even though it is.

As we enter his office, Secord apologizes for the mess. Spread all over his desk are materials for a new book— another volume on dog art, this one based on the AKC’s collection. We begin our chat and he tells me how he went south for college, heading for Carlton in Minnesota.

After graduating with honors in Art History, Secord attended graduate school at New York Univeristy. After academia, he worked at the American Museum of Folk Art. While there, he learned from the museum’s director, a dog person, about the American Kennel Club’s plans for a Museum of the Dog. The eminently qualified  Secord became the founding director and led the museum through its early years.

The AKC, however, decided to move its rapidly growing collection from New York City to a huge, historic home outside St. Louis. Secord wanted to stay in New York and he wanted to open the only gallery in North America solely devoted to fine art depictions of dogs. So, selling paintings from a downtown loft, he tried to raise money for his own exhibition space. Quite successfully, I might add. The William Secord Gallery opened in 1990, no doubt with floors creaking, tables looking untouchable and special dog cookies waiting at the door.

Sadly, Secord’s own Norfolk Terrier, Nora, can no longer be found bounding through the gallery halls. Nora died recently, though Secord doesn’t say she died, but instead that  she “went to her reward.”  Once again, there is little sentimentality in his voice, though he sounds wistful when he talks of Nora trotting on little legs during walks through Central Park.

If Nora was William’s immediate family, the canine regulars who accompany clients to the gallery make up an extended clan. Secord recounts a list of visitors including ”Woofie,” a huge rescued mutt, a Welsh Terrier known only as “The Deputy Dog,” and the owner of Rhodesian Ridgeback who bought his pup a private plane. I immediately fixate on the jet setter and ask about the reasons behind such an extravagant expenditure.

“People say they pamper their dogs,” muses Secord. “But they really pamper themselves. Dogs don’t know the difference between wool and cashmere jackets, or diamond collars.”

I resist the temptation to ask if the Ridgeback ever learned to fly. Secord begins describing his clientele— some who wear five thousand dollar couture dresses and hold their accessory dogs at arm’s length, and some who wear the very same couture but play with their dogs on the gallery floors. Under not very intense questioning, Secord does admit to buying Nora one useless pamper-piece— a crocodile collar with a silver buckle and gold medallions.  “She only wore it for special occasions,” he adds. He says this factually, once more leaving the inherent cuteness of the statement hanging in the air. In fact, Secord speaks extensively about his dear departed, no-doubt adorable  dog, but never pours on the sugar.  He seems to respect her too much for that. “I’m big on dogs as companions, on treating them well, on dogs as family members,” says Secord. 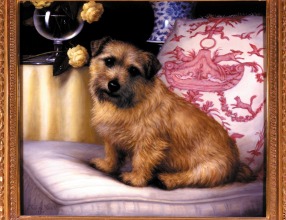 Before she died, Nora posed for a portrait by Christine Merrill. Merrill, one of only three living artists represented by the gallery, specializes in a 19th century style.  The portriat, hung in Secord’s home, shows Nora perched upon a velvet cushion, surrounded by fine porcelain, white roses, and richly embroidered fabrics. She isn’t wearing her crocodile collar.  In fact, the painting seems so disconnected from the 20th century that Norfolk could just as easily be sitting on a velvet cushion in some affluent, gas-lit home a century ago. This is no coincidence, as a hundred years ago was the very height of what Secord calls, “The Golden Age of Dog Painting.”

The moment I hear this important sounding title, I immediately picture beagles wearing togas and laurel wreaths while strolling around the Acropolis.  While there are no such novelties in this gallery (Don’t even ask about pooches playing poker), there was indeed a golden age for a school of painting which focused exclusively on the canine.

It happened mainly in 19th Century England. The influence of the newly formed Kennel Club in London was rising— as was the new leisure class around it. These happy factors combined with Queen Victoria’s legendary love of canines to cause an explosion of devotion to dogs.  When Victoria declared a collie her favorite dog, for instance, everyone in fashionable London got collies. When her dogs were painted, the gentry followed suit. This was no kitschy fad, either. Serious artists specialized in dog painting, making rigorous, detailed studies of the animal’s anatomy in order to produce work of the highest possible caliber.

Secord demands this very same seriousness from the artists he represents today.

“A lot of painters who send me photos of their work,” he says, “Don’t even get the anatomy right, let alone the personality of the dog.”

The personality of the dog?  How does an artist capture that?

“Very few people can, actually,” he says. “Christine can do that. Once she did a painting for a friend of mine as a surprise for the lady’s husband.  He came down the stairs, saw the painting, and started crying, it looked so much like his dog.”

What more can a painting do beyond provoking such a gut reaction?

Secord thinks for a moment, then makes a pronouncement.

The question must arise: Who will follow Nora as the leading member of the William Secord Gallery family?  Secord, who is on the board of directors for the ASPCA, wants to go the rescue route. He has a big, Mastiff-sized mutt in mind, though he knows getting around the city with one will pose many a problem.

“Taxis won’t take dogs that big,” he ponders. “I live down on fifteenth and couldn’t walk [the dog] up to seventy-sixth every day. In this city, you have to balance your dog and your lifestyle.”

Another hitch is that Secord and companion Bruce Bierman are currently in the midst of remodeling their loft. Bierman, who was inducted last year into the Interior Design Hall of Fame, likes to combine 19th century dog paintings with modern furniture. He will also apparently be needing to make accommodations for a very large, very furry new roommate.

Before I leave Secord’s gallery, I decide to tell him about my Sheltie, Phantom. After all, from the Border Collies of his Canadian youth to Nora— the first Pooch of the William Secord gallery; to Deputy Dog, Woofie and a Ridgback who dreams of flight, Secord has known many dogs. He also knows them from in the art he studies, collects, sells and loves.  It would almost be rude, I think, not to mention my wonderful dog to someone who would so obviously enjoy hearing about him.  So I do.

Padding quietly through the gallery on my way out the door, I’m smiling with amusement, Secord’s response fresh in my memory.

“It’s funny,” he told me. “I could see you on the street six months from now and ask, ‘How’s Phantom?’ but I wouldn’t even know your name.  I’m bad with people’s names, but I remember their dogs.” 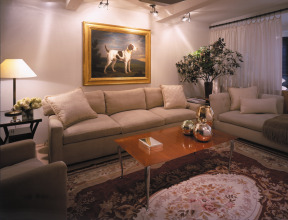 “I like to put in something unexpected,” says Bruce Bierman of his design work.  Adding a bright, colorful dog painting to a subtle, monochrome interior makes just such a statement.  Bierman did so in the living room of his and Secord’s loft (above), and he often recommends the same for his clients.

“[Dog paintings] always elicit a smile from people, whether they’re dog people or not,” says Bierman, adding that he “never places a dog painting as just a decorative item.  They’ve always been reflections of clients.”

Recently inducted into the Interior Design Hall of Fame, Bierman has been praised for a serious approach that keeps a lighthearted sense about it, which shows in his choice of art.

Though England was the capitol of the dog painting world, artists across Europe depicted man’s best friend as part of 19th century life.  Instead of posing them for portraits, Belgian Charles Van den Eycken specialized in placing his subjects in an active scene.  Alfredo de Simoni painted A Favored Pet in Rome, around 1890.  Achille Giroux’s pampered pet portrait is early for the genre.  Later in the century, dogs became high fashion in France, as the Societe Centrale Canine (French Kennel Club) held elaborate shows in the Tuileries.  All of these paintings, though a hundred years old and older, “remind us of a dog [we’ve] known,”  as Secord says.