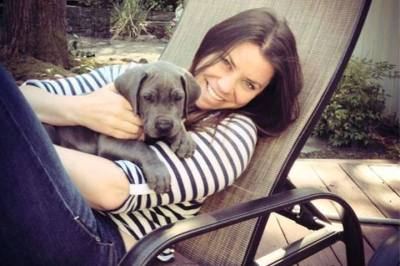 Brittany Maynard died with dignity Saturday at her home in Portland, Oregon at 29-years-old. She was diagnosed with stage 4 Glioblastoma and doctors gave her only six months to live.

“Goodbye to all my dear friends and family that I love. Today is the day I have chosen to pass away with dignity in the face of my terminal illness, this terrible brain cancer that has taken so much from me … but would have taken so much more,” she wrote on Facebook. “The world is a beautiful place, travel has been my greatest teacher, my close friends and folks are the greatest givers. I even have a ring of support around my bed as I type … Goodbye world. Spread good energy. Pay it forward!”

Maynard became an advocate for the right to end your own life and launched an online video campaign with Compassion & Choices. Her parents and husband moved with her to Oregon; to take part in Oregon’s Death with Dignity Act – by taking a fatal dose of barbiturates, prescribed by her doctor.

“My Glioblastoma is going to kill me and that’s out of my control,” she told PEOPLE last month. “I’ve discussed with many experts how I would die from it and it’s a terrible, terrible way to die. So being able to choose to go with dignity is less terrifying. For people to argue against this choice for sick people really seems evil to me. They try to mix it up with suicide and that’s really unfair, because there’s not a single part of me that wants to die. But I am dying.”

Obviously animals can’t tell their vet what they think or want done, and pet parents are left to make that uncomfortable and heartbreaking decision to terminate an animal’s life. The operative word here is “life”. A life whether four-legged or two-legged is still a life.

If pet parents have the right to end a terminally ill pet’s life, why shouldn’t they have that same exact right for themselves, minus the moral scrutiny and judgment?