If you’re a dog lover, you’ve probably seen “Useful Dog Tricks performed by Jesse.” on YouTube, a videothat has garnered more than 14 million views in 2 years and a half! 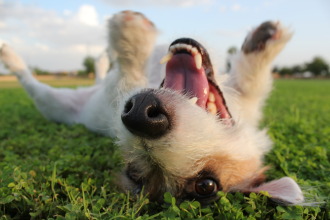 Tail always wagging, the Jack Russell merrily turns a lamp off and on, opens and closes drawers, pull off his booties, cleans countertops and windows, helps someone off with her sweatshirt, opens a wallet, closes a door, and even more.

Who is the trainer behind the scene? Heather Brook of Litchfield Park, AZ, is 21 years old and was 16 when she got Jesse. She quickly realized he needed an outlet for his boundless energy. So she turned to trick books, studied dog training and, always relying on positive reinforcement, she helped Jesse master an impressive variety of tricks that she captured in videos that went viral and eventually landed the duo appearances on The Rachael Ray Show (“Amazing Animal Tricks”), The Late Show with David Letterman (“Stupid Pet Tricks”) and in several commercials.

Animal Fair met with Heather Brook and asked her about her relationship with Jesse.

AF: What inspired you to become a dog trainer?

Heather: Jesse was the inspiration to become a dog trainer. When he was 9 weeks old, he taught himself how to sit up. I started teaching him the basic tricks and he kept picking them up really quickly. That is when we started working on more advanced and amazing tricks. The enhanced communication and bond that came from spending time together is what pushed us to continually expand Jesse’s vocabulary. I decided to become a dog trainer because I wanted more people to be able to enjoy their dogs and have a wonderful relationship and bond with their dogs like I had with Jesse. I also wanted to spread the word about positive reinforcement and relationship-based training. I wanted to show what is possible with time, patience, and a bond.

AF: What is your training technique?

Heather: Jesse and I train using positive reinforcement and relationship-based training. With this method, the relationship and bond between dog and person is put first and foremost, and is the foundation of our training method. Jesse is rewarded for offering and performing behaviors with treats, toys, and praise. To teach new behaviors, we use shaping and a clicker to mark the exact moment Jesse is doing something right. Shaping is where approximations towards a desired goal are rewarded all the way up to the finished behavior. With this type of training, Jesse is encouraged to be creative and express himself. I like to make sure that Jesse is having fun in all that we do. Our relationship is based on love, respect, and mutual understanding.

AF: What are your Top 5 Training Tips for someone at home?

Heather: When teaching your dog, it is important to understand how your dog learns, and how the world is perceived from their point of view. Furthering your knowledge on canine education is the first step to a better relationship with your best friend.

My Top 5 Training Tips would be:

1) Bond with your dog. Have a relationship, first and foremost, and training will come naturally.

2) Dedicate yourself to spending time with your dog, and be patient.

3) Focus on what you want your dog to do, and teach him.

4) Go at your dog’s pace; every dog is an individual and learns at their own speed.

5) Mix it up. Just like you, your dog can get bored with repetition. Switching up what you practice with your dog will make training sessions more fun because your dog will be wondering what fun activity you will be working on next. When you come back to learning the same behavior, you will be surprised at how eager your pup will be to practice again; as well as how his skills for that particular behavior have improved.

AF: What animals do you have at home?

Heather: I have a Jack Russell Terrier named Jesse. I had fallen in love with the Jack Russell Terrier breed when I was younger, and after waiting 5 long years for a JRT of my very own, I received Jesse for my 16th birthday and we have been inseparable ever since. Jesse was named after the famous talented singer and actor, Jesse McCartney. My sister has a German Shepherd named Kaine, and a Papillon Mix named Lucky.

AF: What is the funniest trick you ever taught a dog?

Heather: The funniest tricks I taught Jesse was probably the fake pee. This is a behavior that is requested a lot in the commercial/film industry. It is always funny to see people’s reactions when I ask Jesse to do this behavior because they are not sure if he is really peeing or not. This trick always gets a laugh when Jesse does it.

Heather: Jesse and I support AZ Jack Russell Rescue, Inc. Sandy and Gary Mittendorf have been involved with rescuing, rehabilitating, and re-homing Jack Russells into their forever homes for a long time. They do a phenomenal job of taking care of the JRTs in their care. They also host JRT Fun Days where Jacks can have fun doing the things they were bred for. In 2008, Jesse won a national contest hosted by Bissell and was able to donate $10,000 to AZ Jack Russell Rescue. Jesse and I love to support animal charities because it makes a difference in the lives of the dogs who receive the donations for their care.

Heather: I have not trained cats, but I do know that they are extremely smart and can be taught a wide variety of tasks.