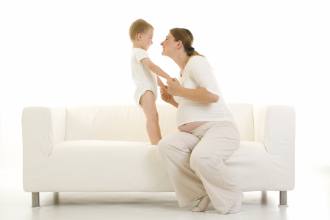 Cats are many things: sociable, lovable, and potentially hazardous to pregnant women. The last claim may seem dubious at best, but pregnant women would be wise to exercise caution around cats. That is because cats are carriers of toxoplasmosis, an uncommon but serious disease caused by a protozoan parasite that can spread to almost any warm-blooded organism, including humans. For pregnant women, the danger of toxoplasmosis is especially troubling, since infection can lead to miscarriage or congenital defects.

Although dogs can also carry toxoplasmosis, cats are the more common hosts of the parasitic disease. Characterized by such symptoms as fever, loss of appetite, and depression, toxoplasmosis is primarily transmitted to cats through the ingestion of raw meat and unpasteurized milk. The condition then passes on through the animals’ feces, a source of transmission for humans. Whether it’s from doing something as basic as cleaning the litter box, a person may unknowingly come into contact with the fecal matter, potentially leading to accidental ingestion and the contracting of toxoplasmosis.

According to veterinarian Holly Nash of PetEducation.com, an estimated 60% of pregnant women afflicted with toxoplasmosis will pass the infection on to the fetus, with severity depending on the stage of pregnancy. While miscarriages are common in the earlier stages, congenital defects – including mental retardation and blindness – are more likely to occur around the second trimester.

However, hope is not lost for cat lovers. As Dr. Michael Davidson, associative professor of companion animal and special species medicine at North Carolina State University College of Veterinary Medicine, notes, “Doctors used to say the woman should get rid of the cat, but that’s totally unnecessary.” For one thing, people are much more likely to get toxoplasmosis from eating undercooked meat or unwashed vegetables than from touching a cat’s fecal matter. According to the Humane Society of the United States, “because it’s difficult for cats to transmit toxoplasmosis directly to their caregivers, a pregnant woman is generally unlikely to contract from her pet cat.” 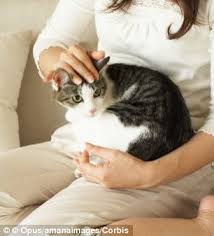 But just as importantly, there are many steps a pregnant woman can take to avoid getting toxoplasmosis from a pet cat. Some of the more basic measures include always washing your hands, not feeding raw meat to a cat, keeping your cat indoors to decrease its exposure to sources of toxoplasmosis, and having somebody else clean the litter box. If these steps are exercised properly, there is no stopping a woman from enjoying a healthy pregnancy in the company of a feline companion.