Any devoted cat parent believes that they can understand their cat’s cries. The truth is, as some linguists and animal specialists have extensively studied, this is a definite possibility. By manipulating their one-word vocabulary (“meow”) through pitch and length changes, cats have devised their own language for communication. Household cats are quick to discover that humans do not communicate primarily through body language and scents, as they do, so they attempt to develop a custom-made vernacular for their parents. It is important the owner first looks at the length of the meowing in question. A single meow is usually a greeting, while several are means of being gabby, (an important note when considering breeds, the Siamese and other Oriental breeds enjoy increased chatter and drawing attention to themselves). If the meows are drawn out the cat is making an insistent demand. The owner can also classify meows by pitch. Lower pitches are fervent complaints; mid-level pitches are polite requests; while the high pitches express pain, “ouch!” Jean Craighead George, author of How to Talk to Your Cat, divides these calls into feline groups. Like infants, kittens have limited vocal options. Their only cries consist of pleas for help. Higher pitched mews are polite, but with increased volume and frantic cadence, the kitten’s request becomes urgent. Adult cats apply more diversity. A loud meow is a command, but falling cadences imply a “protest or whine.” Mews are subtle attempts for attention from their parent, but meows are an “emphatic plea for attention.” A short, sharp, single note can express “righteous indignation.” Tomcats use different calls to challenge other males, and attract females. Ear-piercing caterwauling is done only when in heat. Nursing mothers use different sounds to attract, manage and protect their kittens. 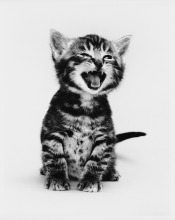 But none of these language laws are definite. The Fortean Times, an outlandish British magazine, found one cat that reportedly spoke several words in Turkish, speculating that maybe all cats were speaking Turkish. Cornell University graduate student and cat lover Nicholas Nicastro has his own take: “No matter what we like to believe, cats are probably not using language.” Nicastro recorded over 100 housecat meows and through extensive audio tests found that cat language has adapted from that of their African ancestors, but he concludes that “cats are domesticated animals that have learned what levers to push, [and] what sounds to make to manage our emotions.”