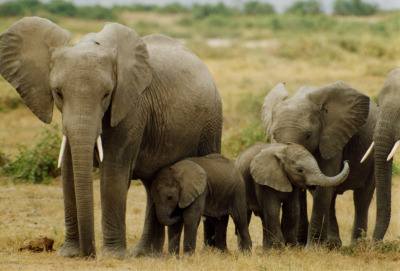 We all know that elephants the most powerful land creatures in the world. But there’s a lot we don’t know – like that whole idea that elephants love peanuts? Completely false. Or that their size makes them fearless? Nope, they avoid trees that have ants crawling on them. But there’s one fact that is important that we learn and acknowledge so that they get the respect they deserve; elephants are just like us. Here are ten reasons why:

1. They have a skin care regime too.

Though humans will do almost anything to prevent wrinkles and elephants are born with them, there are still similarities in how we need to care for our skin. For one, both elephants and humans get burnt from a day in the sun. Because elephants in the wild don’t have shelves full of sunscreen options at the tip of their trunk, they use a much more, holistic, method – mud and sand. While this works extremely well, orphans who are under human protection often haven’t learned this technique yet, and thus are covered with umbrellas or are slathered with sunscreen instead.

2. They leave a footprint on the environment.

Literally. Elephants’ footprints leave such an impact in the ground that when it rains; the print fills with water, acting as a small watering hole for numerous smaller creatures.

Their version is not as reckless as our habit with cars however, unless you’re a small creature crawling in the underbrush. Elephants can run up to 30 km/hour. That’s almost 20 mph. Though it doesn’t sound like much compared to our cars speeding at 85 or reaching 150 mph, when put in perspective with their up to 14,000 lb weight, there’s definitely a lot of power behind them.

4. They can all wiggle there ears… and do so much more.

While most of us only wish we could do that. Elephants use their ears for many purposes. They can flap them like fans to cool themselves down. They can communicate their mood with them – you can tell if an elephant is anxious or angry just by looking at their ears. What’s even cooler? The ears of an African elephant, which are much bigger than those of an Asian elephant, are actually SHAPED LIKE AFRICA. Pretty cool, right?

5. They were feminist BEFORE it was cool.

When it comes to elephants, females rule the school… or herd, in their case. Made up of many generations of female relatives, these herds are the ultimate version of ‘girl-time’. Can you say girls’ night out – ALL THE TIME?

6. They have a dominant side too.

Just like most people are either right-handed or left – handed, elephants have the same approach, only instead of it being in regards to hands, this refers to their preference of tusk usage. Just like we use our favorite hand for heavy lifting and complicated tasks, elephants use their favorite tusk for uprooting trees and digging up earth. And just like we only write with our non-dominant hand if our first choice is in a cast or out of commission, they only use their second choice of trunk of their first is severely injured.

7. Elephants have a very important social life – just like your teenage daughter.

These gentle giants are actually some of the most social animals in existence. They even have their own language, which humans can not only not understand, but can’t hear either! Elephants also rely heavily on physical contact; they would certainly agree with you that nothing’s more comforting than a reassuring touch after a long, hard day!

8. They like to swim too – and even have a built- in snorkel!

Just as humans go to the neighborhood pool to cool down on a hot summer day, elephants love to take a dip in their local watering hole. Despite their size, elepants are graceful and gifted swimmers, which is aided by their use of their trunk as a snorkel, but certainly isn’t completely attributed to it!

9. They’re take care of those in need.

Elephants follow a ‘no man left behind’ mentality. In the face of trouble, they are extremely protective of anyone who can’t protect themselves. To keep them safe, the herd forms a circle around the elderly, the sick, and the young, so that the stronger adults can form a shield until the coast is clear.

10. They may forgive, but they’ll never forget.

Science has backed it up; elephants don’t forget. The reason? Evolution. The older an elephant gets, the more they’ll be able to recognize other elephants as either friend or foe. This memory responsibility falls most heavily on the shoulders of the matriarch of the herd because she is the oldest. By monitoring the elephants that get close to her herd, this allows the others to focus on mating and feeding without having to worry. This strong memory is also the reason that elephants will mourn the loss of their loved ones just as strongly as we do. With such a strong memory, all I know is I wouldn’t want to get on their bad side – who knows if they hold grudges?

For all of these reasons, elephants are just like us. They play and eat, they swim and run and have unreasonable fears. They care for and will do anything to protect their family, and miss them when they’re apart. And just as we sometimes need to be protected by others, they do too. These elephants need our help because for whatever reason, there are still people out there in the ivory trade. There are still poachers. These elephants are still not safe.Help us make a difference for these majestic creatures. They won’t forget; will you?

To get involved and help out,please  visit and help these giant souls.. http://savetheelephants.org or http://www.sheldrickwildlifetrust.org.

Check out Wendy’s episode of ‘Let’s Save! The Asian Elephants’ in Thailand here: