Are you superstitious? Do you accept that the behavior or antics of certain animals as symptomatic of an impending event? Do you believe that a cat has nine lives; that cows can forecast bad weather by licking at the trees and if a robin redbreast were to enter into your home then it would bring with it some bad news?  Whether you believe in superstitions or regard them simply as a collection of nonsensical trivia, they exist throughout the world and have done since mankind began. Entertaining, thought provoking and always fascinating especially within the animal kingdom where tame and domestic animals merge together as one in the eyes of the paranormal.

Take for example dogs; intelligent, loyal companions and conceded as being blessed with an inner second sight which enabled them to perceive ghosts and sense death. Our ancestors thought to hear a howling dog lamenting outside a home was forewarning of an approaching bereavement; that the dog heard to be whining at the birth of a child was a warning the infant would lead an unhappy life; whilst the Irish considered it unlucky to meet a barking dog first thing in the morning.  Forecasting weather was another area in which dogs were regarded to possess some paranormal powers and so if one was seen to be eating grass, rolling on the ground or scratching themselves more than normal it was generally an indication of rain; and for the canine that sought sanctuary underneath the table or became agitated for no apparent reason, locals knew that by the end of the day they would have a thunderstorm. 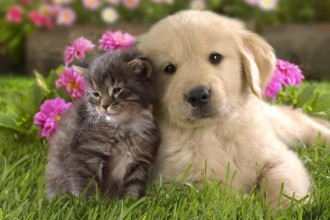 Perceptive, strange even eerie but our feline friends have more than their share of superstitions associated. The coloring of individual cats played a great influence on peoples’ attitudes in the past and thus associated them with many superstitions: in parts of Great Britain black cats were seen to be bearers of good news and if it should cross one’s path then Lady Luck would shine on them the following day: likewise no one would deter a tabby or grey colored cat from taking up residency in their home because they also were bearers of good fortune. But unfortunately not all cats were looked upon with such grace, although strikingly beautiful white cats, often found to be deaf, were looked upon with great trepidation in some countries whilst in Spain, Belgium and parts of America a white cat crossing one’s path was regarded as being a good omen.

As with dogs, cats too are very perceptive when it comes to change in weather, a fact of which our ancestors became very familiar with: for example rain was imminent if a cat sneezed, and for the cat that insisted sitting with its back to the open fire country people believed this was a sign of a storm brewing. But don’t worry it wasn’t all bad weather, should it begin scratching its claw against the side of the table leg it could well be indicative that a change of weather is on the way for the better.

But perhaps you are the proud owner of a rabbit, then if so you may be familiar with the term ‘If you chant White Rabbit three times very quickly on the first day of a new month Lady Luck would shine upon you throughout’. But that is by no means the only superstition concerning rabbits, one of the oldest good luck charms carried around by country people is the foot of a hare or rabbit with many connotations to explain why: gardeners believed the rabbit/hare’s foot contained some special quality which would in turn enhance the growth of their flowers: poachers believed that by carrying a rabbits foot on their person they would never be caught; others believed it would help certain medical ailments such as rheumatism whilst in America a common concept was that because rabbits are born with their eyes open they are able to see off evil spirits from their first moment so are good to have as a pet, or there is another widely held concept, that because their prolific breeding exhibits a creative power this is automatically associated with prosperity and success. It seems whatever way you look at it those who own rabbits are lucky people but then again aren’t all owners of pets.

Perhaps you own mice or a lizard, have become parent to a tortoise or eventually satisfied your lifelong dream of owning a horse – well, surprisingly enough each animal have their own fascinating collection of superstitions.

As regards mice they seem to have attracted a lot of bad publicity over the years yet for many people they would have no other pet. Amongst some cultures mice are alleged to be the souls of murdered people and so it was looked upon that if one should nibble at one’s clothes or even a bag of flour during the night then this was a clear indication of impending bad fortune. In various parts of England some people feared that if mice should enter into a home where they had never been seen before, then this was an indication of an imminent death in the family; whilst in parts of Germany a white mouse is said to be lucky and would bear the household good fortune.

Can you imagine that the largest tortoise known to date was indeed a Galapagos tortoise whose home was at the Life Fellowship Bird Sanctuary in Seffner, Florida USA, that was until its demise in November 2002. At the time of his sad death he measured 1.358m long; an amazing 1.92m wide, 68.5cm tall and weighed in at an astounding 417kg. But if your pet tortoise is far smaller, and hopefully it is, then in some countries they are a sign of strength and longevity but the Native Americans believe that the tortoise creates earthquakes because it carries the world on its back – well at least it is the for the tortoise!

Moving on from the slowest creature to one that has become quite a popular pet over the years, I am referring to the lizard. Love them or hate them it seems they have not gone unnoticed by mankind and in Britain and parts of Europe the lizard is thwarted with superstition. Take for example if a bride should see one en route to her wedding then it was considered that the marriage would be an unlucky one. And in France if a lizard should run over a woman’s hand superstition foretells that she will become quite a good needlewoman although the association with sewing and lizards is rather strange!

And finally, if you own a horse and it just so happens to be a white one, the good news is that our ancestors believed they had been blessed with an extra sensory perception and so could forewarn of danger. Furthermore it was considered that they lived longer than a dark coloured horse and within some cultures meeting a white horse is a sign of good fortune on the proviso when you come across one you should spit and make a wish, or alternatively cross one’s fingers until a dog is seen.