I’ve always been a little-dog person. Even if I didn’t live in a city (where apartment space is at a premium and you’re responsible for cleaning the sidewalk after your dog) I would still be a little dog person. I don’t understand these golden retriever ‘types’, one of whom would be my husband.  A lab or shepherd mix can be nice enough, sincere, earnest, playful, but as far as I’m concerned a real dog should be timid, feeble, neurotic, snappish, picky, babyish or a combination of all of the above —like me, I guess. I don’t know where my theories on what a dog should be like came from. In grad school, a fellow student brought her tiny Yorkshire terrier to class, where it would sit at her feet gnawing on a pencil, which appeared gigantic between its tiny front paws. I thought it was the cutest thing I had ever seen, and my only desire was to have a little dog like this, even though later, while passing the other student’s parked car (she had run into a shop, briefly), I saw the tiny and docile pup ripping up the seats and screaming bloody murder, that it had been cruelly abandoned for five minutes.  As soon as I made a bit of money from my writing, I ran out and bought a Yorkshire terrier.

I bought Lulu from a home breeder. While the other puppies played and romped on the floor, six week old Lulu, the runt of the litter, hopped on my lap and sat prissily, with a smug expression on her face that seemed to say, “Get me out of here, away from this riff-raff.”  I lugged her around for the next eleven years. Her personality was not pleasant, but very strong.  She had more than a few unpleasant character traits, one of which was to bite anyone who even inadvertently touched her with their foot.  No foot, according to her, was ever supposed to touch royalty, including mine.

It was my belief, after I got Lulu, that she needed companionship and after a few months I got her a friend, Beep-beep. In no undecided terms, she spent the rest of her life—and Beep-beep’s —letting me know I had made a mistake. Each pleasantry Beep-beep bestowed on Lulu was received with a growl. Nevertheless, they did love each other and during the times when Beep-beep had to spend a few days away, at, say, the veterinarian, she seemed curiously diminished. Without him to loathe and lord over, her life was without purpose. They were like an old married couple that didn’t know how dependent they were on one another. Beep-beep, though small, was tough, macho and neurotic in his own way. On the street people walking big dogs would often approach and I would do my best to yank Beep-beep out of the way. “Don’t worry,” the other person would say, “My dog is very gentle.” “Yeah, well my dog isn’t,” I would be muttering just as the other dog began to bend gently for a friendly sniff. At this point Beep-beep, who had previously appeared innocuous, would launch straight up into the air, without warning, to sink his teeth into the unsuspecting dog’s snout. Once while visiting my mother up at Cornell University, where dogs were allowed freely on campus, I watched him chase some huge terrified hound across the grassy quad. He only weighed about five pounds but had no idea of his own size, only that he had plans to beat the hell out of the other guy. Fortunately his legs were too short to ever catch the intended victim.

Following Lulu’s passing, it was months before I was able to get a new dog, this time a hairless Chinese Crested who looked like a whimsical character from Dr. Seuss. At first Beep-beep had no use for the new puppy; she adored him and he was unaccustomed to this. In his cranky old age, he beat up his new concubine, Nike, if she happened to be frolicking too close to him while he slept. He would spring up and give her a sound thrashing. 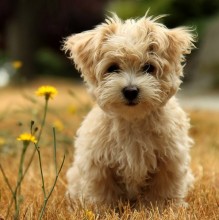 Beep-beep grew more demanding as he got older. Nike did prolong his life, however; in time, he came to appear to be quite fond of her, even going so far, one day, while we were on a hike in the woods, as to run back some distance to help her cross a little stream. (Nike had —has—her own set of neurosis, one of which is that under no circumstances can she get her feet wet; another is that she is far too tiny to jump off or on the bed or even walk up a step, though she actually is quite large enough to do both of these).

After almost twenty years of having small dogs, I know what I want: Something small, peculiar, petulant and spoiled that will sit on my lap and punch me angrily with a paw if I stop petting it. Something that weighs only a few pounds and thinks of itself as royalty. Something with picky eating requirements and an expression on its face that says: I am Lap Dog, Queen of the World, and this is My Person. I’m thinking, next, maybe a Japanese Chin? There’s something about that pompous little squashed face with buggy goldfish eyes … or maybe an Italian Greyhound, long ballerina legs, shivery, prancing … oddly, each of these suggestions provokes my husband to whimper and mutter, “Mutt. Mutt. Mutt.”  – Tama Janowitz