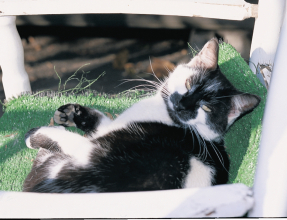 The hands of the clock in the Peace Tower shift closer to twelve noon as a slight, elderly gentleman carrying a bag walks briskly towards a railing overlooking the Ottawa River behind the Parliament building.

Here, in an out-of-the-way location, just above a wooded hillside, is a protected area with a platform and cat sized wooden shelters located behind the iron railing. From nearby shrubs, cats of different colors scurry expectantly to the platform, for it is lunchtime. Rene Chatrand, a pensioner, volunteered to feed the animals in 1987 when Irene Desmoreaux died. Ms. Desmoreaux had been faithfully feeding stray cats here since the late 1970’s.

The cats that live here have been neutered and inoculated against various diseases, including rabies and distemper. One young white female became pregnant before receiving medical attention, and four small kittens soon became members of the group. As soon as she finishes nursing her young, she will be spayed. But in the meantime, the kittens are a delight to watch. One of the four has disappeared, but the others are learning from their mother how to fit in and follow the routine. 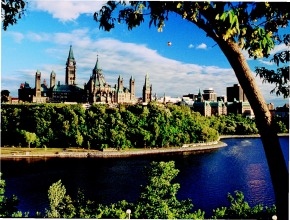 Like all felines, each cat has it’s individual charm and disposition. Some are shy, and others obviously enjoy being patted by the tourists who come over after visiting the Parliament buildings.

Occasionally, cat enthusiasts and even some tourists help by donating toward the cats’ expenses (estimated at more than $6,000 annually). But it is really Mr. Chartrand, known as “the Catman on the Hill” who shoulders the expense and comes every day, rain or shine, to care for his friends.

On a sunny day in autumn, it is an idyllic scene with cats resting in the sun and tourists enjoying them. But for those familiar with Ottawa’s grim, cold winters, it is obvious that without Mr. Chartrand’s daily visits, many of the 27 or so cats might not make it through the winter.

But for now, in this sunbathed setting, it is time to snooze and schmooze with the tourists who have come to spend a moment with Ottawa’s feline ambassadors.

For additional information on travel to Canada and Ottawa, visit: www.ottawakiosk.com.