Four years ago today, the animal (and human) world lost one of its brightest and furriest shining stars. On June 5, 2012, our beloved pet icon Lucky Diamond, the inspiration for Animal Fair, passed away. Lucky’s life and her legacy of saving the underdog will be celebrated and her mission continued. Lucky helped me realize how lucky I am no matter what transpired in my life. I have been beyond grateful for the outpouring of generosity and support  from friends and strangers who know exactly how much Lucky meant to me and how she inspired me everyday, even after her passing. After witnessing Lucky’s brave fight with canine cancer, I vow to raise increase awareness for animal cancer and help bring permanent homes to the 5 million animals that are still euthanized each year, in Lucky’s honor.

Please watch this 2 minute video honoring one of the most important dogs in history (at least we think:)! 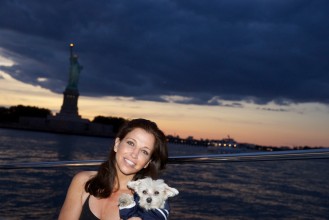 Lucky’s barkstory begins with our hairy hero on her way to the pound. Meanwhile, Wendy was talking with trainer Bash Dibra and expressed interest in adopting a small dog. Bash visited later that day and presented Wendy with a furry fluff ball of love named Chloe. When Chloe was introduced to Wendy she started loudly yapping and running in circles, causing canine chaos and putting on one show. Wendy took one look at the spirited hound, rolled her eyes, and sighed “Oh boy, aren’t I Lucky!” And, in 1999,  Lucky Diamond was born.

Lucky had no idea just how lucky her life would be! Wendy was so inspired by her little Maltese that she started Animal Fair Media, fairness to animals. Alongside Wendy, Lucky promoted animal rescue and help endangered species globally. Together they created a media mindshare where charity and celebrity combined their power to raise public awareness about animal rescue and the need for adoption from shelters, both nationally and on the local level. Lucky’s relationship with Wendy grew into unconditional love, loyalty, and a genuine bond that grows and grows when people and their pets live and work together with mutual respect and harmony.

In her never-ending quest to give back (and get some treats in return), Lucky served as the Chair-Dog for the Katrina Pet Memorial, Grand Marshall of Barkus, and the American Cancer Society’s Bark for Life and hosted 1000’s of fundraisers in her lifetime. She was the only civilian dog admitted into the United Nations, and served as the inspiration for the White House Pet Correspondents Benefit, St Pawtricks, Yappy Hour, Paws For Style, and Howloween events, all to promote animal rescue and welfare. The Humane Society of New York has even named a wing after Lucky. Check out AnimalFair.com to take a look at Lucky’s abundant accomplishments and adventures!

Lucky was inducted to Guinness Book of World Records as the lucky puppy to be photographed with the most celebrities of all time! Over 300 world-renowned A-list celebrities, politicians, athletes and entrepreneurs of the 21st century have been photographed cradling Lucky at charity-related events. The list of celebrities featured in this one-of-a-kind Who Got Lucky? photo collection include: Bill Clinton, Rosie O’Donnell, Dave Matthews, John Travolta, Kanye West, Betty White, Barbara Walters, Sting, Cloris Leachman, Kelly Ripa, Hugh Hefner, Jessica Biel, Kim Kardashian, Sir Richard Branson, Cesar Milan, Buzz Aldrin and many, many others. 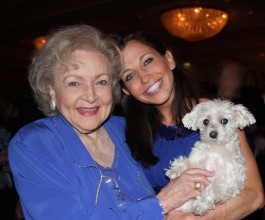 Wendy and Lucky traveled the globe finding new, innovative ways to help disenfranchised animals. The dynamic duo graced Russia, Greece, and Mexico searching for puppy love in all of its many breeds and meanings. Eventually, Lucky inspired Wendy to pen a collection of best-selling books including;How to Understand Men Through Their Dogs, How to Understand Women Through Their Cats, It’s a Dog’s World: The Savvy Guide to Four-Legged Living, and her new witty instructional title; How to Train Your Boss to Roll Over. Chicken Soup for the Soul recruited Wendy and Lucky to write the forwards for their pet series – including What I Learned from the Dog and My Dog’s Life editions.

Lucky’s underdog-to-posh-pup journey was not easy at the start, but has certainly left a trail of love and service the entire way. Lucky Diamond was a true New Yorker. She rubbed snouts at the local park dog run by day and attended charity events benefiting other animals by night! Lucky has been Wendy’s muse and close canine companion since the day they met. She inspired Wendy to discover her true calling, helping animals in need. Lucky has left her undeniable mark on the world!

Despite its many hardships, life can be absolutely magical in its spontaneity. Just before Lucky died, a friend asked Wendy to foster a senior dog named Baby Hope. She never planned on keeping the dog at the time, but the little Coton de Tulear, though a little ruff around the edges, was paw-sitively heaven sent. The morning Lucky passed, Diamond awoke to find Baby nestled right up next to her. It was as if they had their own spiritual canine code. Baby comforted Lucky as she went to the big doggie park on the other side. Since then, Wendy decided to adopt Baby after fostering her for three weeks.

Baby Hope had some huge paws to fill, but she shouldered her newfound celebrity, responsibility, and spokespuppy-ship like a champion.

Baby Hope’s lavish, record-setting wedding was originally supposed to be for Lucky, but evolved into a moving celebration of Lucky’s life and legacy, as well as a way to bring awareness to animal cancer and rescue, the most expensive pet wedding in history.

Even in her death, just like in life, Lucky helped raise awareness about animal issues in order to help her canine colleagues. Lucky gave her canine cancer a strong, hard fight, and brought this awful disease further into the forefront of animal issues to investigate and to combat with research and medical developments.

In her many rich dog years, Lucky touched many lives of many species. She traveled, she met Hollywood’s jet set, and she touched the lives of all those she crossed paths with. Lucky, you are missed every single day!

She was the sweetest, purest soul and totally without prejudice. Lucky was truly one of a kind, and there will never be another dog like her! We will miss her dearly, and she will never be forgotten.

Honor Lucky’s life and service by donating to The Humane Society of New York: and her favorite animal cancer charities – Morris Animal Foundation and  Lucky’s body was donated to cancer research.