A South Carolina cable company had hours of empty airtime to fill. Someone at the station decided to simply aim a camera at the office aquarium and let the live shot go out unedited. Viewers loved it. A few months later, when the on-air fish tank was replaced by the premier of the Sci-Fi Channel, the cable company was flooded (pun intended) with calls asking for the “fishcam” to be put back on the air. It was.

If your local cable company doesn’t carry fish on demand, there is an abundance of tapes and DVDs with dazzling marine footage available at Amazon.com. Live web-cams and screen-savers can turn a computer into a cyber-aquarium; the marine craze even has today’s toy makers creating robotic fish that swim using magnetic sensors and have lights that pulsate in time to music.

On the surface, the video-quarium and robo-fish would seem to have lots of advantages over the real thing. After all, pseudo-fish are inexpensive, they don’t have to be fed, and their tanks never need cleaning. Best of all, fake fish never die. Given the advantages of the alternatives to real aquariums, one might wonder why fake fish aren’t more popular than the real thing.

That’s easy! It’s because real matters. No picture on a flat screen could ever capture the grace and tranquility of a uniquely designed aquarium. No battery-powered toy offers the satisfaction one gets from creating and sustaining a healthy, happy, self-contained ecosystem.

The tanks you see on these pages are brilliant examples of living sculptures—works of art that combine ancient aesthetics with brilliant new technologies. Blending color, light, sound and scent, these habitats, like any good art, can have profoundly uplifting effects on the human spirit.  Not to mention the human body and mind!  Medical evidence is mounting about the powerful therapeutic properties of aquariums. Adding aquatic life to a room has been shown to reduce stress, alleviate depression, lower blood pressure and even ease some symptoms of ADD and Alzheimer’s disease. 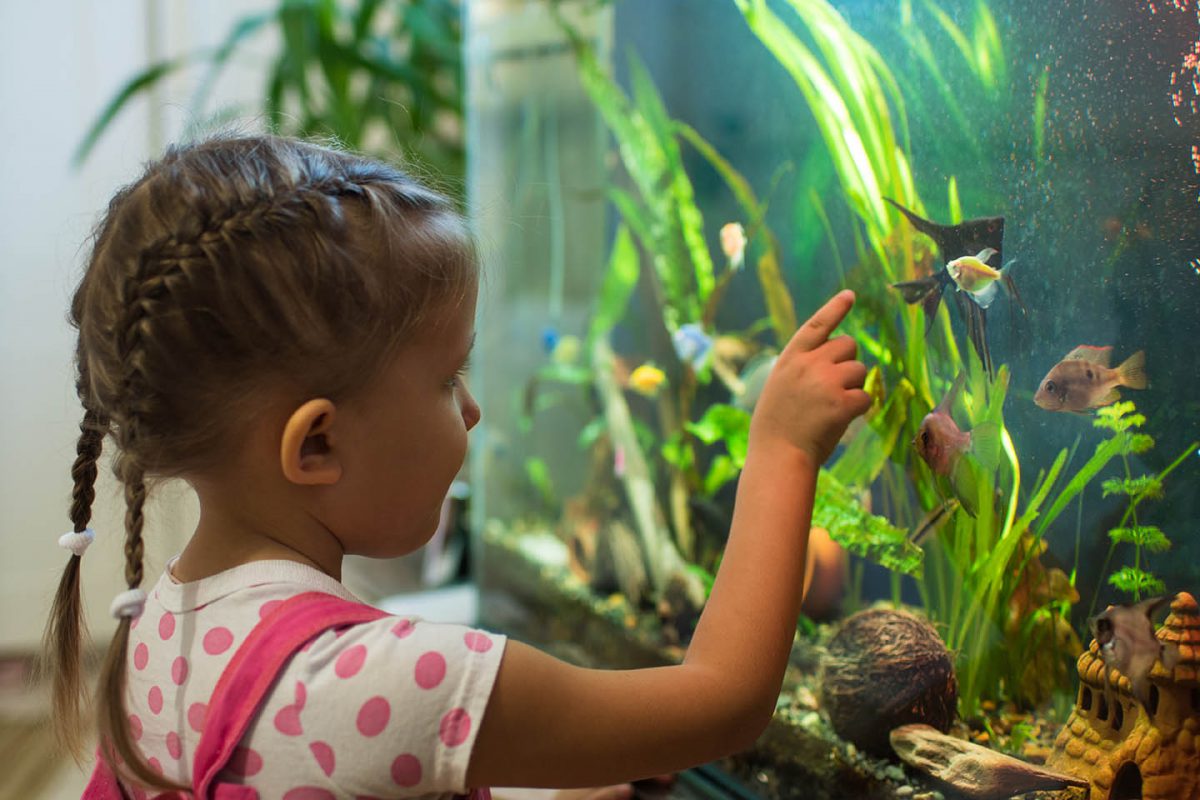 But though modern science may just now be catching up, humankind has known the benefits of aquaculture for centuries. Since prehistoric times when we first began keeping fish ponds as ready sources of fresh food, marine life has had a powerful symbolic hold on the human imagination.

In the West the fish has long been a symbol Christianity, but it holds vastly different meanings for different cultures. In Hindu thought, for instance, Matsya the fish is the first incarnation of the god Vishnu, while ancient Egyptians saw fish in the stars and painted them on the walls of holy places. Pagan cultures associated aquatic life with Aphrodite (aka Venus), goddess of love born of the ocean, and Roman nobles maintained elaborate reservoirs on their country estates.

In China, fish have always represented abundance. It was there, during the Tang and Sung dynasties, roughly from 600 to 1300 AD, that wealthy Chinese landowners first began selectively breeding carp to create the dazzling ornamental goldfish we know today. A few hundred years later, increasing trade between Europe and Asia brought the avocation of aquaculture to Great Britain and the hobby quickly grew fashionable among the aristocracy. Decorative lakes and ponds became marks of distinction on the sprawling estates that dot the English countryside.

When these aristocrats went into their city homes in London, they wanted to bring their fish along with them, but moving aquatic life indoors presented all sorts of problems. A pond, after all, can be pretty self-regulating, but an indoor habitat demands careful management of temperature, light, food, oxygen, waste, and water flow. Victorian tanks, like the opulent examples by Mott & Fiske, seen here and housed at Alice’s Antiques in New York City, represent some of the first successful efforts at creating and sustaining indoor environments.

Around the same time, the world’s first public aquarium filled with specimens gathered from the far-flung British Empire opened at Regents Park in London.  Whereas public interest was high, the facility failed when almost all the fish immediately died due to improper care.

Things have, thankfully, changed considerably since then. Marine research continued to advance both the arts and sciences of aquariums throughout the twentieth century. Today, enhanced tank materials, along with better understanding of aeration, filtering, temperature control and nutrition, has made the joys of aquaculture more accessible for both private hobbyists and public marine exhibit enthusiasts. Fish are now America’s second most popular pet, trailing cats and outnumbering dogs. More than 7.4 million U.S. households now have aquarium fish, and that figure does not include goldfish in ponds or bowls.

It does include fishighways; a business based near Chicago, run by Rutgers educated engineer Mike Sullivan. In an almost evangelical effort to “set free the fish” as he says, Sullivan designs, fabricates and installs his fishighways in art shows, restaurants and private homes.

Working on a hydro-engineering principle akin to using a thumb to hold soda inside a drinking straw, fishighways allow hobbyists to let their fish roam freely around a home, seemingly in defiance of gravity. Sullivan makes the plans for building fishighways available on his website for download in a .pdf format as well (www.fishighway.com). That way, he says, people on a budget, those who don’t live near him, or folks who just like doing it themselves can build their own systems. This is, in his words, “for the good of all pet fish everywhere.” He isn’t exaggerating about the “everywhere” part, either. Fish highways have already been installed in places as far away as Malaysia.

For the public aquarium enthusiast, the sad days of Regent’s Park are a distant dream, as these pages lavishly illustrate. Legendary tourist spots like the New England Aquarium in Boston and San Diego’s Sea World continue to draw millions, and spectacular new destinations are popping up all the time. In Houston, there is the restaurant ‘Aquarium.’ Developed by Landry’s Seafood Restaurants’ Tilman Fertitta, the man behind the Rainforest Café chain, Aquarium is dazzling with a 200-seat dining room surrounded by 36,000 gallons of water contained in floor-to-ceiling tanks. All of this is built around the world’s tallest fish tank, a 15,000-gallon, 35-foot cylindrical showpiece.

For sheer scope and grandeur nothing on earth exceeds the Atlantis resort’s complex on Paradise Island, Bahamas. The 34-acre complex is the world’s largest marine habitat. More than 50,000 animals representing 200 species live in eleven separate lagoons. Atlantis is laced with forty waterfalls, five freshwater swimming harbors, two underground viewing grottos and a quarter-mile boat ride through varied water habitats. Truly astounding is “Predator Lagoon” where guests can view feeding time from above, or walk through a clear 100-foot underwater tunnel to watch sawfish, barracuda, and sharks swimming just inches away.