The history of war dogs goes back centuries and canines were fighters in war alongside the great ancient Roman, Greek, and Egyptian armies. Romans had attack formations with dogs wearing coats of armor with spiked collars. The fighter dogs were offered as gifts by European royalty to each other for breeding. 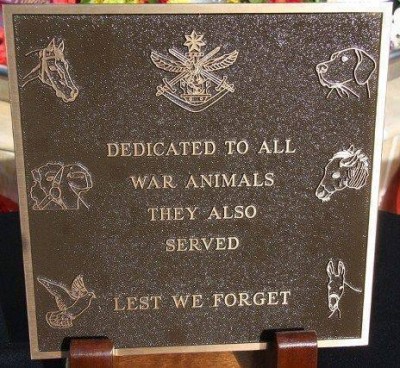 The United States army started using dogs in the military during Seminole and Civil wars, particularly the American Pit Bull which also became the poster dog and mascot for propaganda and recruiting.

American troops in World War II would chose a certain breed as their mascot, and the dog(s) would actually remain in the war trenches with the troops, as a morale booster – therapy dog!

Today’s dogs proudly serve and assist in the United States and are called a Military Working Dog (MWD), or K-9. Their roles are comparable to their ancient cousins, but not as much on the front lines as before! As of 2011, over 600 U.S. Military dogs were active in the Iraq and Afghanistan wars.

Each dog is trained by a professional handler and stay with that person for approximately a year, depending on the circumstances. The breeds most used as military dogs are German Shepherds, Belgian Malinois, and the Dutch Shepherds.

More recently canines have taken their place as companions and therapy dogs for wounded troops when they return home with injuries or Post Traumatic Stress Syndrome (PTS).

Canines deserve recognition and a salute for providing our troops safety and comfort, and by keeping our nation free, so we can enjoy taking a walk in the park – with our furry best friends whenever we choose! Salute to all the men, women and dogs that have served our country – we thank you!

For more information about canine therapy for our wounded warriors visit: P2V , or contact them directly at: 877.311.4P2V (4728), or www.companionsforheroes.org