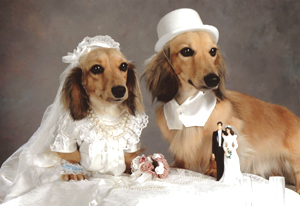 For those of you who don’t remember Jinxie, he is Robert De Niro’s favorite furry obsession in the movie Meet the Parents. After a series of cat-related mishaps, Ben Stiller, playing male nurse Greg Focker, finally proposes to his girlfriend Pam, played by Teri Polo, using the high-maintenance himalayan. He ties a ring on a ribbon around Mr. Jinks’ neck, popping the question and winning Pam’s hand in marriage and De Niro’s approval.

Everyone knows how crucial the proposal is in a bid for marriage. In an attempt to make that moment as special as possible, people look for new and unusual ideas, many of which seem to involve a family pet. Take Frank, for example.  Frank and his girlfriend Heather had been dating for five years when Frank decided the moment was right to ask her to be his mate for life.  The couple had always wanted a dog, and Frank thought this the perfect opportunity to combine two fabulous life-altering choices. Knowing miniature Schnauzers tickled Heather pink, he went off to find a responsible breeder. After some investigative work, he found the perfect pregnant pup in upstate NY, whose babies would be ready for a new home in about a month. This gave Frank time to purchase the engagement ring and get the plan ready.

On the sly he picked out the most adorable puppy in the litter and gave the breeder a special tag and collar for the dog to wear when they came to pick up the furry bundle of joy. The plan was in action.

In a month’s time Frank and Heather drove upstate for what she thought was a casual ride in the country. They passed a house with a sign out front which read “Puppies for sale,” and Frank insisted they pull over. The breeder brought the puppy out and handed it to Heather, who could hardly hide her excitement when she saw it was a miniature Schnauzer. She read the tag around the dog’s neck that said “Heather will you marry me?” After a moment of confusion, Frank was on one knee, Heather was crying, and the puppy was licking her face.  Heather says, “Having Junior participate in my engagement to Frank was the most memorable moment of my life!”

Others, such as Larry, wish their proposals had gone as smoothly as Frank’s. Larry wanted to use his Yorkshire Terrier Hank to pop the question to his girlfriend Pam. In anticipation of her return from a successful business trip, Larry tied the wedding ring around Hank’s neck with a thin white ribbon.  Pam called Larry to let him know she would be a little late arriving home, and when he went to remove the ring from around the dog’s neck, the ribbon and the ring were nowhere to be found! Larry frantically searched the apartment, coming to the realization that Hank must have chewed through the ribbon and swallowed the ring. He quickly put Hank in the car and just as he was about to pull out of the driveway, Pam returned. When she asked Larry where he was going, he told her Hank had swallowed some aspirin and he was taking the dog to have his stomach pumped. 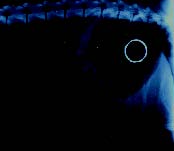 Concerned, Pam jumped into the car and they were off. At the hospital, Larry insisted on speaking with the doctor alone claiming Pam was too hysterical. They took x-rays to locate the ring and sure enough it was smack in the middle of the dog’s stomach. Larry sighed with relief when the doctor assured him the dog would be fine. Pam was led into the examining room, and with the x-ray lit up on the viewbox Larry explained what was in the dog’s stomach, got down on one knee, and proposed to Pam. Pam was thrilled and told Larry she was sure the ring was beautiful and couldn’t wait to have it out of Hank’s stomach and on her finger.

Stephanie and Glenn had an easier time of it. They had been dating for seven years when Glenn decided the timing was right. He wanted  Caesar, their golden retriever, to be an integral part of the proposal.  Caesar, a creature of habit, always buried the same bone in the same spot in their backyard. This gave Glenn his idea — he searched for the perfect antique wooden box and then engraved, “I love you sweetheart. Will you marry me?” on the outside of the box. On July 17th of 2000, out of Stephanie’s sight, he quickly buried the box with the engagement ring and Caesar’s favorite bone inside. Excited, Glenn called Stephanie outside as Caesar began to dig, claiming the dog had dug up something interesting. 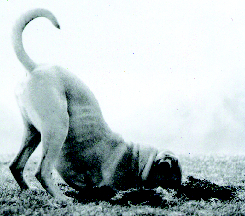 Stephanie and Glenn stood over the digging Caesar as he scratched at the box. Stephanie bent down to see what it was and Glenn told her to pick it up and see what was inside.  Stephanie was appalled saying it was probably the coffin of someone’s dead hamster. When Glenn picked up the box and rubbed the dirt off the top he read it to Stephanie, “I love you sweetheart, will you marry me?” Stephanie wondered whose it was and how long it had been there. But when she opened the box and saw Caesar’s bone and a beautiful diamond and sapphire wedding ring, she laughed, then cried. “It was so within Glenn’s character to propose engagement using Caesar in a funny and touching way,” said Stephanie. The couple saved Caesar’s favorite bone for posterity; the box on the other hand didn’t fare as well.

Precision and timing are required to get things just right if you use an animal to assist in a proposal, and anyone whose owned a pet knows this is nearly impossible. So if you dare use your animal in a proposal, good luck: if you get it right, and even if you don’t, the results can be dazzling!