It’s that time of the year again when young children prepare to go hunting for conveniently placed eggs that were left by a mysterious, basket carrying creature with big ears – the Easter Bunny. With the holiday getting closer there is a noticeable influx of stories that aim to explain the strange connection between rabbits and Easter. 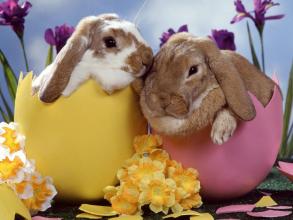 Rabbits have been associated with springtime, fertility and rebirth since ancient times. Many people believe that the origin of the egg-giving hare is connected to an Anglo-Saxon goddess, Eostre, who represents spring and whose symbols are a hare and an egg. Other sources suggest that the tradition of paying your debts in forms of rabbits or eggs shortly before Easter during the Middle Ages might have contributed to the myth. The precise origin of the Easter Bunny is not known. The first record of it can be traced back about 330 years to the German physician and botanist Georg Frank von Frankenau who wrote about Easter customs and the related health risks, when eating too many eggs at once. The belief of the Osterhase (Easter Hare) was later brought to America by German settlers.

The excitement and heavy marketing of Easter has created another side-effect: with the arrival of chocolate versions comes an increase of cute little live Easter rabbits in pet stores. Rabbits are still considered low-maintenance pets, despite the fact that they aren’t passive, have a lifespan of 10 years and require a lot of work. Contrary to the hype, rabbits and children are not a good mix. The energetic and impulsive nature of the child is far too stressful for the sensitive rabbit. Often the results of such short-sighted Easter gifts are abandoned bunnies at shelters once the holidays are over. 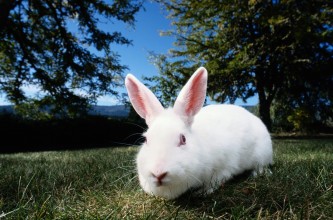 Please educate yourself before you get a rabbit and make sure to check shelters and rescues after Easter. They will have an abundance of unwanted Easter Bunnies waiting to be adopted.