As the fastest-growing developmental disability with about one in one-hundred-and-fifty births affected, autism has thrust itself into the limelight as one of today’s most prevalent children’s health issues. Now, families and friends of autistic children are fighting more than ever to learn about this puzzling brain development disorder and what they can do to help.

Even Hollywood has pitched in with causes like Comedy Central’s Night of Too Many Stars: An Overbooked Benefit for Autism Education, created by Robert Smigel, who is the man behind the naughty puppet Triumph the Insult Comic Dog, and whose own son, Daniel, is autistic. Smigel and friends raised over $2.5 million for autistic research and education, and has attracted some of the biggest names in comedy — Adam Sandler, Ben Stiller, Larry David, Sarah Silverman, and Amy Poehler, to name a few. And while more and more funds are being provided to further education about autism, new treatments and practices are being applied to improve the lives of these children — service dogs being one of them. 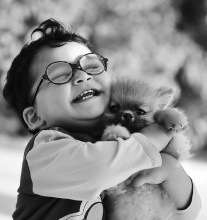 Autism Service Dogs of America (ASDA), a non-profit organization, was the first service dog agency in theU.S.to provide service dogs for children with autism. Founded and run by Priscilla Taylor, a former special education teacher, these service dogs are trained from birth to assist autistic children who have a tendency to run away from their guardian, run into streets, or need comfort and guidance in social situations.

“The dog also serves as an emotional and psychological anchor for the child,” saysTaylor, “Which allows the child to stay calm and results in less frequent tantrums and meltdowns, because the child receives the calming influence of the dog.  The children also talk to the dog a lot and therefore the child’s expressive speech seems to improve, as well as the ability to empathize to others in a more normalized psychological fashion.”

Though several breeds can be used as general service dogs,Taylorsays that the ASDA specializes in training Golden Retrievers and Labs, which are child-friendly and natural pleasers. These service dogs begin their training within four weeks of their birth, which consists of learning basic commands, and then are moved on to volunteer families to be socialized for about twelve to sixteen months. The dogs are then trained by the ASDA advance trainers for additional command lessons, socialization temperament testing and evaluation. As the last step before placed into homes, the dogs are put in pre-placement training to learn the necessary commands, including something called “tether training,” which is one of the most important aspects of the service.

“After a very short period of tether training with the child, the child bonds with the dog and wants to be near the dog, so the child naturally and willingly stays close. There is no longer a struggle with the child being in many public environments or being in public for longer periods of time.”Taylorexplains.

The Meyers family, who received a service dog from the ASDA for their son Joshua, has seen the improvement of their child in leaps and bounds. Charlie has even helped Josh with his mobility, allowing him to go up and down the stairs on his own for the first time.

“We prayed for a miracle, and Heaven sent us a four-footed angel named Charlie,” says Joshua’s Mom, Leslie.

With these autism service dogs, more and more children and families are finding the amplified ability to function and grow. These dogs provide parents of autistic children the comfort in knowing that their child will develop healthy social habits, and will also gain a loving companion for life.

For more information on the ASDA, visit: http://autismservicedogsofamerica.com. Also, check out this video of some of Josh’s improvements with the help of service dog Charlie: http://www.youtube.com/joshandcharlie.  Another wonderful group Helping Families Dealing with the Challenges of Autism  http://www.dogsforautism.org .