Breaking up is hard to do – throw a pet into the mix, and it’s even tougher.  Whether married, living together or just dating, it’s easy for both parties to get attached to a mutual pet.

One of the best options after a breakup is to discuss a fair way to split custody of the pet with your ex. Jennifer Keene, author of the book, We Can’t Stay Together for the Dogs: A Dog-Friendly Divorce and Break-up Guide, notes that there are several ways to split the time – but says that one of the best ways is to do a week-on/week-off or even a month-on/month-off schedule, which “usually gives each parent fairly equal time with the dog and is structured enough to allow the dog to develop a routine.” 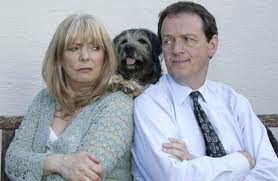 As for custody battles that get taken to the legal level, David Favre, a professor of law at Michigan State University College of Law and a national officer of the Animal Legal Defense Fund and ABA Committee on Animal Law, says that he would urge couples to “work it out among themselves and do what is best for the animal…The occasional judge will, never the less, take it under advisement, but the vast majority of cases need to be worked out between the parties.”

Favre points out that legal options are very limited and have varied legal provisions for awarding pet custody according to state, and most law still considers animals as “chattel,” or property. J. Michael Kelly, a divorce lawyer in California (where the law still says that pets are chattel) and part of the California Family Law Institute, confirms this, and says that because the animal is grouped in with “the silver or the table,” the divorce suits can get complicated.

“If the pet is bought during the course of marriage, then that pet is community property, period,” explains Kelly. “But if either one of the parties bought the animal before the marriage, then unquestionably that is separate property, no matter what.”

But if the ruling isn’t so simple, then each half of the couple needs to supply the most evidence in order to gain custody. “People will hand the judges long declarations about their relationships with the animal and why they’re the best person to keep it,” Kelly says, “Who took it to the vet, who didn’t, who fed it, who didn’t. Some people with a lot of money will bring in an animal psychologist and deal with it that way.”

Whether you choose to share custody, take custody, or forfeit custody to your ex, keep in mind that the ideal situation will always be what’s best for your pet, even if that means stretching your own comfort level.

For more info on Jennifer Keene, pick up We Can’t Stay Together for the Dogs: A Dog-Friendly Divorce and Break-up Guide, or visit: jenniferkeene.com. For Professor David Favre, check out his books, visit: animallaw.info. For J. Michael Kelly, Esq, visit: cfli.com.