When Canadian truck driver Kenneth Duncan split from his wife, Barbara Boschee, in 2004, he also split from the couple’s Saint Bernard, Crunchy. During the divorce proceedings, Duncan offered to pay $25 a month to help support the dog, but according to the Alberta court and Duncan’s ex-wife, that measly sum would just not do. Instead, Duncan was ordered to pay $200 a month in “petimony” for Chrunchy, in addition to a $2,000 retroactive payment. Duncan was also stripped of any visitation rights of his now former “best friend.”

According to CBC News, Duncan’s case was “the first time a Canadian court has elevated a pet above chattel status in divorce proceedings. Normally, pets are ranked with furniture and non-living household property, and given a lesser value.” The ruling came only because of pressure from the American court system below. “U.S. courts are increasingly ruling pets are more akin to children. American judges have begun to rule on joint custody, visitation rights and support payments.” While Duncan’s split from his pup must have been heart wrenching, had the dog been an actual child, the payments would have been almost $700 a month based on his income bracket.

Petimony is a relatively new word that is creeping its way into courtrooms worldwide. Much like alimony or child support, petimony is money ordered by the court for one party to pay another party strictly for a pet’s expenses following a divorce. Specific information on petimony cases are rarely released in the United States, unless, of course, they are high profile cases. One such case was former mayor of New York, Rudy Giuliani’s ex-wife, Donna Hanover, who requested over $1000 a month for their dog following the couple’s 2002 divorce. Unlike Barbara Boschee’s case, Hanover was denied. Hanover did, however, walk away with almost seven million dollars even without the petimony payments. 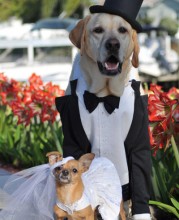 Pet custody battles have confused courts for years, and according to law, animals have typically been treated as property. Today this is all beginning to change. Ohio Supreme Court Justice Barbara Howe describes pet custody battles as “a very important issue that needs to be dealt with in a serious manner.” Other experts have hope. Dog law expert and attorney Linda Cawley is thrilled by the progress in pet-related cases in the courtroom, “The courts are beginning to recognize the intrinsic emotional and physical value provided by these four-legged characters … in most cases, they’re the heart and soul of their owners,” Cawley says. Cawley handles over one hundred cases a year that range from dog bites to divorce battles where both pet custody and petimony come into play. Colleagues constantly consult Cawley when it comes to animal cases but the growing number of pet cases have led some areas, such as Marin County, California, to create their own special “mediator for animal disputes” in the local courts. Law schools have also seen the spike in pet cases, so much so that Animal Law courses can be found in over forty law schools across the country.

The bottom line is that pets are finally getting the legal respect they deserve, but couples must also take this as a warning. If you get an animal together – stay together – if not, your pet may be the target of a rough custody battle and expensive petimony payments. Nobody wants to undergo that stress, let alone watch your loved one go through it too. You’ve been served!