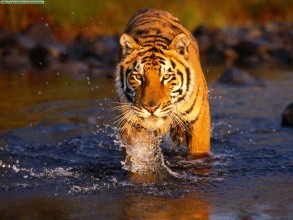 The Indian Supreme Court lifted the Tiger Tourism ban after revising conditions to restrict mass tourism. The ban, put in effect in July, had prohibited visitors from entering the outer 20 percent of 41 tiger-breeding parks because the court deemed that many Indian states where not following national guidelines on protecting the tiger population.

The announcement was welcomed by organizations that provide tourists a first-hand look at tigers in the wild. Wild Planet Adventures, an international wildlife viewing company is set to take advantage of the lifted ban, introducing “Untamed in India and Nepal,” a new 19-day safari excursion allowing visitors venture to four different parks. Josh Cohen, director of Wild Planet, applauded the court’s decision and expects tiger sightings to improve under the new guidelines by reducing congestion in the more well-traveled parks. Cohen has been a long-time supporter of limiting mass tourism to wildlife safaris because of the potential for animals to habituate to humans. Cohen stated that “if there is more enforcement as a result of the new guidelines, then companies like Wild Planet will have a distinct advantage because we employ expert naturalist guides who rely not on radios but on authentic tracking skills such as listening for warning cries, tracking pug marks and looking for residue of kills.” Wild Planet also offers safari tours that allow visitors to experience the extreme biodiversity of the Himalayan region with including 20 highly endangered species.

Although the former ban involved tigers and mass tourism, the main issue threatening tiger safety is illegal poaching. Cohen adds “tourists watching the tigers have many different kinds of impact, but aggressive poaching causes the need for more tourism dollars to be available for anti-poaching forces. There are massive resources being devoted to protecting tigers from poaching because of the dire situation.” Park authorities, the government and NGO Project Tiger are a few of the main organizations supervising the tigers to ensure they are protected.

Other organizations with the tiger’s best interests at heart include, the Save the Tiger Fund and Panthera partnership, India’s Save Our Tigers program, and World Wildlife Fund’s Save Tigers Now program.

It is still too early to tell what the impact the lifted ban will have on tiger tourism in the area but if more safari tour companies follow the example set by Wild Planet Adventures, both the animals and tourists would be able to enjoy the beauty of nature without obstruction.

Tourists interested in an authentic safari experience can find more information on Wild Planet’s Untamed India and Nepal program as well as their live tours in 12 other locations.