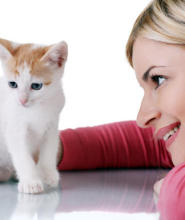 The Holidays have approached, and we all crave extra time with the ones we love—including our pets! We’ve all been slightly suspicious that our four-legged furry feline friends maybe don’t like us as much, but desiring the love returned—we disregard those thoughts and adore our cats anyway! Cat parents clearly love their cats, but do our cats love us back?

The Holidays are chaos in any home, and even though those people coming and going are familiar to you– they are strangers to your cat. However, a new study published in the journal Animal Cognition, has us questioning whether our cats really care? The study found that when researchers played voice recordings of a cat’s name being called by its owner, the feline showed recognition, by “moving their heads and ears to locate the sound,” but then remained totally unresponsive — no meow or movement toward the voice or anything! The cat subjects’ responses did not change when being called by a stranger. The cats responded to human voices not by communicative behavior (vocalization and tail movement), but by orienting behavior (ear movement and head movement).

The study shows that this difference between how cats and dogs express themselves to their owners can be traced back to how each animal was domesticated. Humans have bred and trained dogs over thousands of years, training them to obey commands. Cats, according to the study, rather “domesticated themselves.””Historically speaking, cats, unlike dogs, have not been domesticated to obey humans’ orders,” the study says. “Rather, they seem to take the initiative in human-cat interaction.”The study points out that although cats seem not to care about their owners as much as dogs do, cat owners and dog owners are equally attached to their pets.  ”The behavioral aspect of cats that cause their owners to become attached to them are still undetermined,” Saito and Shinozuka write.

Science has confirmed what we suspected about cats all along: Yes, they do indeed understand us when we talk! They just simply may not care about whom we are and what we have to say.

Let’s face it: Love your cat, spoil it with love this holiday season, but never expect it to really care much about you.