Without hesitation I can say that my best friend in the world is my Rottweiler, “Tuf-Puf”. I named her “Puf” because she looked like a puffball as a puppy, but I didn’t think that she would grow to weigh ninety-two pounds as an adult dog. I added “Tuf” to her name when she was two-years-old to avoid embarrassing her. It sounded stronger to me. Like all best friends, Tuf-Puf and I do practically everything together. We walk in the park. We swim in the lake. We play Frisbee on the beach. We go on long drives in the country and take turns holding our heads out of the window. We have tons of fun together. It has always been a give-and-take relationship with us. I take care of her and, in return, she gives me unconditional love. It works! However, there are a number of public places that discourage people from bringing dogs. Let’s face it, sometimes it is better to let a dog sleep. In an effort to help, I compiled a small list of places where people should think twice before taking their beloved four-legged friends. (Note: small dogs, less than five pounds, are typically exempt from most of these scenarios).

Dogs pride themselves on being able to protect their parents. It’s an instinctive trait! It is a known fact among most dog parents. So why would anyone enter a car wash with their dog in the backseat? A dog cannot determine the motive of the brushes descending on the car from all sides; for all he knows they could be evil homicidal creatures. The dog will erratically pounce from seat to seat, bark ferociously causing foam to fly from his mouth and land all over you and the car’s interior, while clawing at the windows. At one point, the dog will stop banging his head against the back window as if to say “Mom, don’t just sit there. HELP! HELP ME!” When the fiasco is finally over, yes, you will have a clean car, but your dog will be totally stressed with a dangerously high heart rate. Try explaining that to your vet! 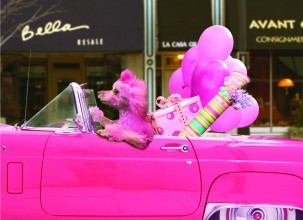 Dogs are not passive. In the animal world, they are considered to suffer from ADD. If you are invited somewhere to watch birds, leave your dog home on top of the steps to guard the front door. A dog does not see a beautiful bird. He sees flying prey! His only motivation in watching a bird is to hopefully kill it, drag it home, and display its body on the front stoop so that Mommy and Daddy can realize what a good boy he really is. Unfortunately, an incident of this type gives the club founders the right to blacklist you and your dog from their group and others similar to it. (Note: this policy is clearly stated in the bird watchers’ handbook. Always be extra careful when reading the fine print).

Forcing a dog to sit courtside at a tennis match is similar to taking a known alcoholic into a bar. It is pure torture and should not be done under any circumstance. Once the dog sees the new, fluffy, extra bouncy tennis balls, all bets are off. Any and all types of past behavioral training will be forgotten. The sheer number of tennis balls around the court might cause the dog to develop a twitch in his neck. He will start to bark as if to say, “Too many balls, too little time.” And you can be certain, as the sky is blue, the dog could be surrounded by dozens of perfectly good tennis balls, but only see and desire the one in play. He will become trapped in doggie tunnel vision. Back and forth. Back and forth. Back and forth. And he’ll be thinking, “Oh my God, what a loser!” This bald guy cannot return a serve traveling 135 mph. I can easily catch a ball going that speed IN MY MOUTH. With the proper training, I could be awesome at this game.” Of course, when he tries to participate by leaping onto the court, the two of you would be banished from the stadium as quickly as humanly possible.

The Walk of Fame

It is a part of nature. Everyone does it, except dogs have no qualms about doing it in public. Trust me; it would be extremely humiliating to have your dog relieve himself on Rin Tin Tin’s or Lassie’s star while strolling down the Walk of Fame in Hollywood. Enough said!

This has proven not to work for so many reasons. For starters, the dog will not stay in the trunk long enough to enter without having to pay for him. Second, he manages to eat both of his hamburgers along with his portion of popcorn even before the opening credits start, and he then whimpers and looks longingly at you with those “puppy dog eyes” until you share your food with him. His constant panting steams up the windshield making it impossible to see the screen. When you leave the car to find a restroom, your “best friend” uses his paw to activate the automatic door lock. While you’re desperately trying to talk him into pressing the unlock button, he decides that he doesn’t like the movie after all and curls up in the driver’s seat to sleep. Your only option is to spend the rest of the night at the concession stand waiting for the locksmith to arrive. And the obnoxious sixteen year-old kid working the ticket window refuses to give a refund.

Shopping for a Mattress

If you allow your dog to sleep on the ‘big bed’ with you at home, that is your business. However, it is not a good idea to take him to your local mattress retailer’s 24-hour display sale and allow him to test the merchandise. It’s in every manager’s handbook to discourage any large, furry animal from lying on any product that they wish to sell at a later time, especially mattresses. It is virtually impossible to remove every dog hair from a mattress! (Don’t believe me? Try it. I can guarantee you will be finding dog hairs for months to come. Not only will it be there, you will always seem to discover them during the strangest of moments.)

Any trip to any nudist colony has potential to go horribly awry. Adding a dog to the equation assures definite disaster. Think about the humiliation that would result if your dog mistakes a part of the human anatomy for a dried pig’s ear, bone, or chew toy. If, for some very strange and complex reason, you wouldn’t be bothered by this occurrence, please think of the dog. A trauma of this sort could stay with a dog for years, maybe even life.

Dogs are known for their unprecedented sense of smell. Some have successful careers because of it, for example, bomb sniffing dogs, drug sniffing dogs, rescue dogs, hunting dogs, and there are even ongoing studies that suggest dogs are able to detect certain illnesses in humans. Given this, it should be easily understood that an entire pig carcass buried under just a couple feet of loose sand should be relatively easy for a hungry dog to find. Even the most laidback partygoer has the potential to get out of control. Don’t make the situation worse by acting like a fool and chasing after your dog in an attempt to rescue the meat. No one is going to want to eat your dog’s leftovers. Your safest bet is to give back your lei, retrieve your dog, and leave quickly and quietly.