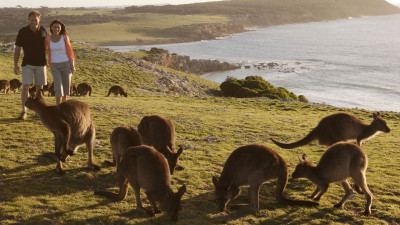 Once used as a penal colony for British convicts, Australia has always had a kind of rough-and-tumble allure.  Even such civilized beauties as Kylie Minogue and Nicole Kidman can’t undo its more Russell Crowe-ish reputation.

But take heart; you need not be a rough-and-tumble ‘Crocodile Hunter type’ to enjoy the incredible landscapes and exotic wildlife ‘in the land down under’.

It will take you twenty-four hours on board an airplane to get there, but when you disembark you will find yourself just a boat-ride away from an animal-lover’s dream destination: Kangaroo Island, Australia.

Kangaroo Island, or Karta in Aboriginal mythology, means the land of the spirits – a place of mystery. It was discovered in 1802 by sea captain Matthew Flinders and his crew, and was so named for the island’s most plentiful resident.  It is an island with a sorted past, filled with colorful stories of runaway convicts, farmers, hunters and ship deserters.  Much of this once exploited land, how-ever, is now protected by National Conservation Parks, so to maintain the diverse vegetation and animal species that exist on the island. 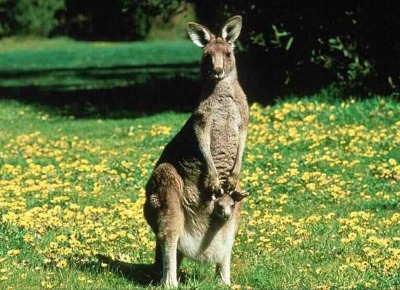 Kangaroo Island, the continent’s third largest island after Tasmania and Melville Island, is only forty minutes off the mainland of Southern Australia.  It is considered one of the world’s most beautiful and unique wilderness vacations. The ‘locals’ on this island getaway are (of course) kangaroos, as well as wallabies, goannas, koalas, echidnas (spiny anteaters), dolphins, bandicoots, sea lions, fairy penguins, fur seals, eagles, whales and ospreys, just to name a few. Free of camera-toting crowds and commercialism, Kangaroo Island boasts a Mediterranean climate, breathtaking scenery, beaches, pure air, and clean water (luxuries by today’s standards), making it one of the last unspoiled wonders of the world.

Kangaroo Island is a perfect place to see wildlife in its natural habitat, as more than half the island has never been cleared of vegetation, and is brimming with eucalypt scrub and herbaceous plants-favorites of the resident animals. Almost one-third of the land has been conserved in National and Conservation Parks, including five significant Wilderness Protection Areas.  Visitors can take nature tours through the Seal Bay Conservation Park, home to 10% of the world’s population of sea lions where they can be observed close up (often from a couple feet away) with their adorable pups playing in the surf.  Another beautiful place to visit is the Cygnet River Valley, where koalas can be spotted dozing in the forks of the redgum trees.

At the Cape Gantheaume Conservation Park, afternoon visitors can see where ospreys nest, and may spot kangaroos that have come out to feed.  Some of the most breathtaking scenery can be found near the Cape du Couedic, in Flinders Chase National Park, where New Zealand fur seals live under the dramatic landmark, Admirals Arch.  Flinders Chase is also the site of the Remarkable Rocks, an unusual formation of weather-shaped rocks in striking reds and sunburned oranges. 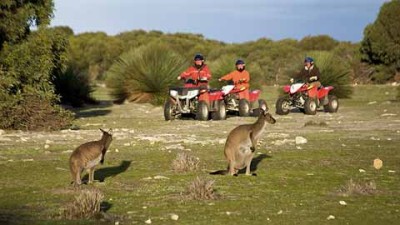 Not only fascinating for its land, the waters surrounding Kangaroo Island entice animal lovers the world over.  According to diving tour companies, divers will see some of the over 270 types of colorful fish, interact with seals and encounter dolphins during an expedition.

In addition to nature tours by land or by sea, tourists can pass their days fishing, surfing, swimming, climbing, boating, and horseback riding.  Visitors don’t have to feel like they are roughing it, as Kangaroo Island is also known for its world-class food and hospitality.  Local favorites include marron (crayfish), sheep’s milk cheeses and yogurts, award winning olive oil, wine and a very special honey made from what is believed to be the world’s last unsullied colony of placid Ligurian bees.

This ‘land of mystery’ continues to intrigue travelers with its rugged coastline, sheltered beaches and numerous exotic animals.  It has been aptly described as one of those rare places where civilization and wilderness meet in harmony.

To find out more about Kangaroo Island, visit http://www.tourkangarooisland.com.au/